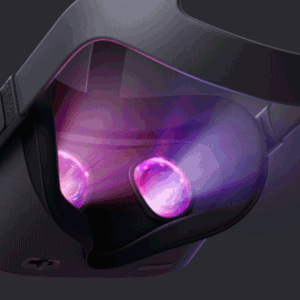 (Los Angeles, CA) October 2, 2018 – Time flies and it’s already been a year since Facebook’s last VR event. At the latest Oculus Connect 5, Mark Zuckerberg’s company has given us a whole lot of new interesting facts – yet one of them is by far much more important than the others. During the conference, which happened few days ago in San Jose, new virtual reality goggles from Oculus were officially announced. Known so far as the “Santa Cruz” project, the headset will go on sale in spring of 2019 under the name of the Oculus Quest.

First time we heard about the Oculus “Santa Cruz” VR goggles was almost two years ago, as a standalone device that did not need a computer or external motion sensors to operate, somewhat similar to the competition available on the market (like Lenovo Mirage Solo or Vive Focus), the single huge difference being the full tracking of the head and hands, in contrast to other models. This is thanks to an inside-out tracking system called “Oculus Insight”, which is based on cameras integrated in the front panel that record both the user’s movements and the Oculus Touch controllers held in his hands – and that is the part of this announcement that adult entertainment companies like VR Bangers find especially interesting. Just imagine the capabilities of such tracking system for adult entertainment VR!

The full specifications of Oculus Quest goggles are not known yet. It’s been said, however, the headset is powered by a Qualcomm Snapdragon 835 SoC and will be equipped with “top-class optics” (the same as in Oculus Go goggles), as well as a display with a resolution of 1600 × 1440 for each eye running at 72 fps. The device will also have a built-in audio system and will be sold in a set with Oculus Touch motion controllers and 64 GB of built-in memory – and all of that at a price of roughly $400.

Until then, the VR future remains to be… experienced.