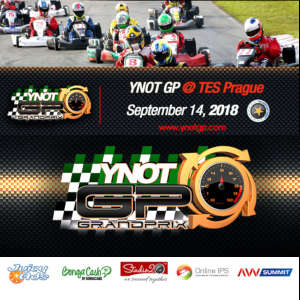 (Prague, Czech Republic) September 8, 2018 – As has been the case with previous editions of the race series, the outcome of the 9th annual YNOT Grand Prix will come down the fourth and final leg of the race, which will run on September 14, during The European Summit (TES) in Prague.

With the current standings in the YNOT GP points race very tight, the $1000 grand prize and lasting bragging rights are likely to wind up in the hands of the fourth race, according to YNOT co-owner and race organizer Jay Kopita.

“As usual, the Grand Prix is coming down the final race – just the way we like it,” Kopita said. “I love having all the marbles still up for grabs when the flag drops on the last leg, because it really kicks the excitement and competitiveness up a notch.”

As things stand now, three drivers are tied at the top of the standings with 10 points, each having won an earlier leg of the Grand Prix. Those racers are Agustin of Gombio, Chris Alex of Way3 and Walter of Tip Top Studios. Another group of three drivers sits just behind the leaders with 8 points accrued in the previous legs.

“Whomever takes this final leg of the Grand Prix is probably going to win the whole thing,” Kopita said. “Hopefully, they’ll be at the YNOT Awards the next night, as well, so I can pay out the Grand Prize to them right there on stage.”

The venue for the race is Kart Centrum, which is generally regarded as the most challenging track of the YNOT GP circuit. At nearly a full kilometer in length, it’s also the longest in Europe, featuring 30 turns which will test the skills of even the race’s most experienced drivers.

Complimentary transportation to Kart Centrum will leave the TES host hotel, starting at 5:30 p.m., returning to the hotel starting at 8 p.m., leaving competitors and spectators plenty of time to join in on other official TES events scheduled for that evening.

As always, the free refreshments and snacks offered during the race are made possible by the generosity of the race’s sponsors,JuicyAds, BongaCash, Studio20, International Processing Solution and AW Summit.

Kopita said YNOT is very appreciative of the fact The European Summit has hosted YNOT Grand Prix events from the beginning, starting with the first GP event in 2010. He also hinted the upcoming leg of the YNOT GP may be its last.

“Next year, we will most likely be switching gears, so to speak, and doing something different after nine years of running the YNOT Grand Prix. I love the race series and everything about it, but the only constant in life is change, and next year it may be time to try something new. I can’t say what it will be, just yet, but you can bet it will be great fun – because if it’s going to replace the YNOT GP, it has to be.”