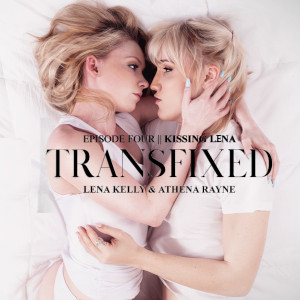 “This episode was so much fun to bring to life because of our source material,” said Mills. “At a time when lesbians were rarely seen or discussed, Tanya Chalkin’s photograph was a reinforcement of the beauty of two women being together as themselves – stripped down, natural and loving.”

The first premium Trans Women-on-Women Showcase Series was created by Mills and her award-winning team at Gamma Films as a celebration of the most beautiful trans women paired with adult’s top cis female performers, setting a new standard within the TS and mainstream adult entertainment world.

“It was an absolutely amazing experience working with Bree and her crew for the first time,” said Kelly. “I’ve never experienced such care and attention to detail as I did on the set of Transfixed, and working with Athena was a ton of fun too! This groundbreaking project is the one to look out for in 2019!”

Rayne echoed Kelly’s enthusiasm. “It was an amazing experience, though it always is when I’m on one of Bree’s sets. I was honored to find out we would be recreating one of the most beautiful posters in lesbian history, and I’m super excited for everyone to see me and Lena in this beautiful, raw experience!”

“I wanted to bring that same intimacy and tenderness to our next Transfixed episode,” said Mills. “Casting Lena and Athena was a perfect choice. They truly embodied the notion of being together as themselves… it is a beautiful episode!”

Fans can visit Transfixed.com to sneak a preview of ‘Kissing Lena’ and join the site to watch the full series as it launches, with included access to Gamma’s full library of award-winning brands and over 50,000 scenes.

Catch up with the Transfixed series – Episode 1, ‘Venus at the Party‘, starring Cherie DeVille and Venus Lux, Episode 2, ‘Chanel & the Wolf‘ starring Kleio Valentien and Chanel Santini, and Episode 3, ‘After Hours with Natalie‘, starring Riley Reyes and Natalie Mars.

Gamma’s previously mentioned library of award winning sites and niches can be promoted across the board by any and all webmasters by way of the FameDollars affiliate program.

No spam, notifications only about new products, updates.
PrevPreviousDanglin’ After Dark Returns with Alex Saint
NextThe Second WTF Summit Russia To Be Held In SochiNext
On Key