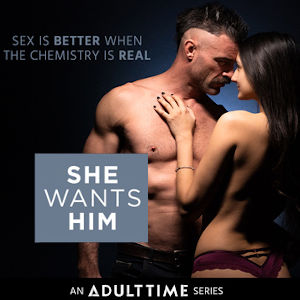 Inspired by fans’ desires for more authentic sex scenes and Adult Time’s vision to produce cross-marketable content, the unscripted series pairs adult’s most extraordinary women with the male partner of their choosing and lets the action begin… naturally.

“I asked three female performers we regularly work with to choose a male partner they have really strong emotional chemistry with and then we shot a candid interview and sex scene with each of them – paying equal visibility to how both partners are feeling. The results are really beautiful!”

She Wants Him more than lives up to its teasing tagline, ‘Sex is Better When the Chemistry is Real’, bowing with ‘Jane & Rob’ (June 4); Jane Wilde and Rob Piper sit for an intimate interview together and discuss their special connection, as do Eliza Ibarra and Charles Dera in Episode Two, ‘Eliza & Charles’, coming June 18.

Each sexual encounter is filmed from three unique angles in order to offer fans an objective view: watch both the women’s and the men’s facial and physical reactions in real-time as they receive the ultimate pleasure.

The X-rated series will be released on Adult Time, and a special ‘mainstream cut’, featuring the stars’ pre-scene interviews, will be released publicly on the streaming giant’s official YouTube (YouTube.com/adulttimecom) and social media channels.

AdultTime.com is home to the most extensive catalog of award-winning content, with unlimited access to over 200 channels, 60,000 episodes and 5+ new releases per day – all in one subscription.

No spam, notifications only about new products, updates.
PrevPreviousPleazeMe Bolsters Sex-Focused Social Platform with Launch of News Channel
NextRay Ray Toasts the Weekend with the Drinking Dirty in Jersey CrewNext
On Key