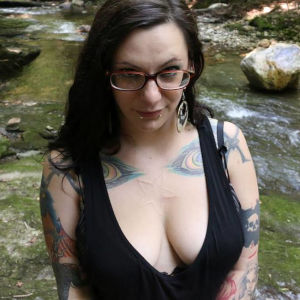 “Producing a feature-length film really took a lot out of Me”, Vendetta says. “I have grand plans to make another one, but this year I focused on a few short film projects.”

The most grand project she has worked on was shooting an artistic, taboo fetish film collaboration with Brutal Master of BrutalMaster.com

Vendetta, who recently announced her Farewell Tour of Clubs, and Brutal are quite a team. They enlisted experienced fetish performer Cupcake Sinclaire (Twitter @CupcakeSinclair) to star. Not many details are available yet, as the film is still in production being worked on, but we do know… it was shot in a church.

“Lilah came up to shoot some content trade out in Western Massachusetts, and some real magic was captured,” says Vendetta.

“It was unexpected. I knew we would get something good, but we ended up creating this really powerful and beautiful piece that I intend to do a lot more with than just sort it into an online clip. One of the things I’ve really been trying to do this year is get My films into art spaces, the stuff I shot with Lilah is directly in line with that. I’ve already submitted some of the stills to galleries.”

Vendetta also did something outside of her wheelhouse: shot a non-adult short film at a popup art gallery, starring queer performer Shane Locke. The film was cut specifically for the 100-Second Film festival, happening this weekend in Easthampton, MA.

Does that mean Vendetta’s not shooting weird artporn anymore? Fear not, also this month she has all kinds of weird kinky film events going on:

November 17th, over on the West Coast, Bella has a new piece being premiered at the Failed Films Film festival, a sploshing piece with a newcomer to the queerporn world: Possum, Queen prince of Filth. Also local to the East Coast, Possum and Vendetta connected over their “absolute glee in squishing juicy fruits beneath body parts”.

The short film will also be screened at the Smut Club Film Festival in Australia, and the full scene released on Trouble Films.

Vendetta says that “aside from all the film festival stuff I also have SO many new clips coming out over the winter, some really cool and weird stuff I can’t wait for fans to see what I’ve been working on.”

Vendetta alerts fans to keep an eye on her Clips4Sale Kink Shoppe over the next few months.

Vendetta’s The Training of Poe and many other alt-adult productions can be promoted by webmasters who join the Trouble Films affiliate program.