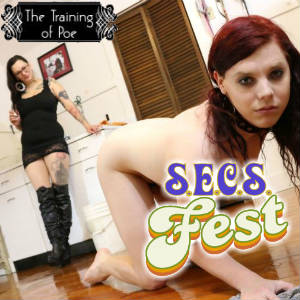 (Massachussetts) August 10, 2017 – Bella Vendetta’s directorial debut, The Training of Poe, starring multiple AVN-nominated Chelsea Poe, will have its official world premiere at the SECS Fest this September 8-10 in Seattle, WA.

“It’s a feature-length film,” says Vendetta of her 122 minute opus. “Only select scenes and trailers have been shown at film festivals. This will be the first time the film has been shown to a wide audience in it’s entirety.”

The Training of Poe has generally been lauded by critics who’ve viewed it in its entirety as “a beautiful film about power, trust, joy… and whips, shackles, clothespins, and dog bowls.”

Vendetta, who has since produced her second film, The Adventures of Bella and Morgan, has not said whether she will be in attendance. The Training of Poe is playing on the final of the three days, Sunday, Sept. 10, at 11 AM.

For more on the film, to purchase individual scenes, full downloads or DVD’s please visit www.TrainingofPoe.tumblr.com