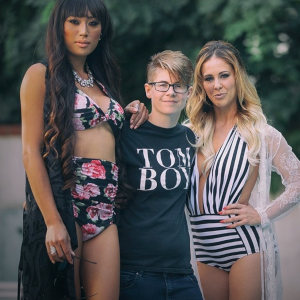 Just in time to honor #TransAwarenessWeek, Bree Mills and her award-winning team at Gamma Films are releasing the show’s trailblazing pilot, ‘Venus at the Party’, starring Cherie DeVille and Venus Lux, today for free at Transfixed.com, officially kicking off the series’ production.

“The pilot was so powerful to shoot that I’ve decided to fast track the edit and offer it for free to anyone who visits the Transfixed.com website,” said Mills of the 45-minute scene. “My intention is to showcase a new era in trans content, and inspire performers who wish to experience shooting a TS G/G scene together to have a beautiful, premium and empowering place to do so!”

‘Venus at the Party’ was loosely inspired by the story of Cinderella and was shot as an homage to the masquerade ball sequence from the popular ’80s film Labyrinth. The scene is set in a retro pool party that transitions into a beautiful fireside encounter with DeVille and Lux.

“Mesmerizing and somewhat still perplexed to have worked side-by-side with Bree and Cherie in this romantic and female-empowered movie that leaves the heart glimmering,” said Lux of the Transfixed experience. “A masterpiece woven with love, intention, romance and detail unlike any movie.

“This will mark my first-ever scene with Gamma Films, and I definitely can say I’m impressed. Thank you Bree and Cherie for this unforgettable experience… the audience is going to love the story!”

“There aren’t many mainstream adult sites right now that offer TS girl/girl scenes, especially in the style and tone we envisioned,” said Mills. “So I decided to create a series just for this – to offer the opportunity for Cherie and Venus and other performers to be themselves… together.”

“As a transwoman, I’m so proud and thankful for the inclusion into this lesbian production,” said Lux. “Strong women creating art featuring women – trans women included – this is a prime example of what I value and love.”

Mills plans to continue shooting scenes for Transfixed over the next few months to prep for the official site launch, and encourages all interested performers to contact Mills and Adult Time via Twitter @transfixedcom, where details on the full launch and upcoming productions are expected to be announced in early 2019.

For more information, visit Transfixed.com. Watch the SFW trailer for ‘Venus at the Party’ here.

Webmasters can transform their trans traffic into dollars by joining the FameDollars.com affiliate program.