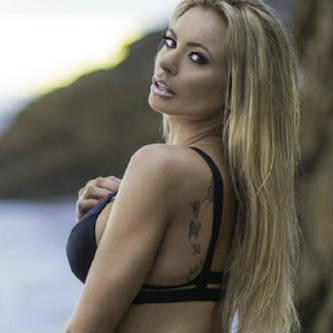 Issue 47 for November is the annual Superwomen issue. It features Tani Rogue, Miss Bliss, and Banks, as well as Bachelor Haus and the world’s hottest fashion and fitness trends.

Photographed by Koeal Braxton, the multi-page layout features highly stylized photos of the legendary adult star on a beach in a one-piece suit and bikini. Banks gives a brief overview of her career from how she got started and her comeback. She’s profiled in the Lifestyle section on Pages 7 through 13.

“We feature the hottest models in the world, but it was an honor to feature one of the best, if not the best, adult stars of my generation,” said Alex Deal, CEO, RHK Productions.

“I’m honored to be featured in their yearly Superwomen issue,” says Banks. “The photos are stunning and super glamorous. My fans are really going to enjoy my layout and interview. Pick up the print or digital copy. Tell RHK how much you enjoyed my featured spread, so you’ll see more of me in their other publications like RHK or Celeb Riche again.”

Webmasters can profit from the Briana Banks legend by promoting her BrianaBanks.XXX home site through the CrushGirls Affiliate Program, powered by ModelCentro.

Blonde German bombshell Briana Banks is one of the most iconic women in the adult industry, as well as one of the most published magazine models, next to Jenna Jameson. Appearing in almost every adult magazine in the world, some of her highlights include Penthouse Pet, Hustler Honey, and AVN covers.

Briana holds the record for being a Vivid contract star, staying with them for eight incredible years and starring in some of their bestselling and most critically acclaimed titles. With over 400 scenes in her career, she has been nominated for countless awards and won Best New Starlet from NightMoves and Hot d’Or Awards, Exotic Dancer Awards’ Adult Movie Feature of the Year, and XRCO’s Best Comeback in 2017 for her triumphant return after a five-year hiatus. Briana was also inducted into both the AVN and XRCO Halls of Fame in 2017.

Keep up with all her adventures by following her on Twitter @BrianaBanksxxxx, Instagram @OfficialBrianaBanks and Snapchat at Bbanks36. Join her CrushGirls website BrianaBanks.XXX to personally interact with the Adult Superstar and view exclusive, high-end videos and photo sets. Get a peek of her on set and in her daily life by joining her Only Fans Onlyfans.com/BrianaBanks, and sext, trade pics, and talk dirty on the phone with her via SextPanter at sextpanther.com/Briana-Banks.

Briana Banks is available exclusively through OC Modeling. Get her on your set by contacting Sandra at 818.298.6939 or Sandra@ocmodeling.com Anthony at Anthony@ocmodeling.com or 818.428.0978.

To interview Banks for your site, publication or show, contact Erika Icon of The Rub PR at erika@therubpr.com.

No spam, notifications only about new products, updates.
PrevPreviousShemale Strokers Strips & Splooges Its Way to 90th Milestone!
NextExoClick Becomes First Presenting Sponsor of The European Summit 2018Next
On Key