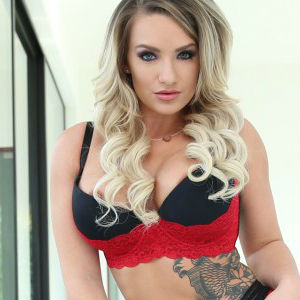 (Los Angeles, CA) Adult star Cali Carter is thrilled to announce the launch of her new website, CaliCarter.com. The high-end web portal is part of The Lust Network group of sites, and is designed to grant fans easy access to exclusive photos, videos, blogs, and more from the award-winning performer.

The site, which features videos including Carter with Penny Pax and Savannah Fox, among other talent, is available for only $29.95 a month, or as part of The Lust Network for $39.95 a month, which grants you access to exclusive content from Kendra Lust, Nina Elle, and more.

“It finally launched! After about a year of talking about it, my site is finally up!” said Carter. “I will be having weekly updates. Coming soon is the store, blog and weekly webcam show. I can’t wait for you to see what I have planned!”

This week, the star of titles such as Freaky Petite 2 and Gag Reflex 2 has been posing for photos and signing autographs for fans at the Inked Angels and Sext Panther booths during the 2017 AVN Adult Entertainment Expo (AEE), held at the Hard Rock Hotel & Casino in Las Vegas.

Carter is represented by Society 15, and is available for solo, G/G, B/G, B/G/G, B/B/G, fetish, and more. Directors and producers who would like Carter on their set can book her by contacting Society 15 via their website.

Webmasters interested in promoting Carter’s fresh new site as well The Lust Network should sign up for the StellarBucks affiliate program.