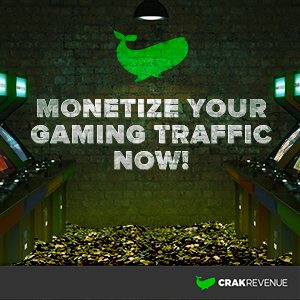 (Quebec City, QC) June 30, 2017 – CPA Network CrakRevenue announced ten days ago the launch of 50+ Gaming Offers which are now available for immediate promotion. On top of this, the cost-per-acquisition network giant also announced the addition of 2 new Smartlinks in the Gaming vertical, one with Mainstream Gaming options, the other targeting strictly Mature/Adult audiences.

After success in five other verticals, such as Cam, VOD, Dating, Survey and Nutra, the CPA network appears to be doubling down on its expertise and has taken great steps to incorporate Online Games into its lineup of award-winning offers. And with more than fifty offers already available, CrakRevenue seems ready to attack the market.

“Although we’ve always been at the forefront of adult gaming for several years, we’re taking it to the next level by officially launching our Gaming vertical,” says Thierry Bouchard, Business Development Manager at CrakRevenue. “Our fresh new products and creatives as well as our brand new Smartlink will make it even easier for you to convert your adult gaming traffic.”

The network’s signature all-in-one ‘Smartlinks’ tool allows affiliates with Gaming traffic to access the industry’s leading Gaming offers, adapted to their geo and device. CrakRevenue had previously launched Smartlinks in other verticals such as Dating and VOD, but also targeting a specific niche.

“Promoting individual Games can at times be a little bit more of a challenge than promoting, say, some other type of individual offer found in CR,” explains Bouchard. “Between app installs, KPIs, carrier restriction and soft vs hard KPIs, the level of factors and complexity can be daunting when you take everything into account.”

This is cause for Bouchard to strongly encourage using Smartlinks. “Especially our Gaming ones. Everything really is continually optimized in-house and guaranteed to deliver the best results.”