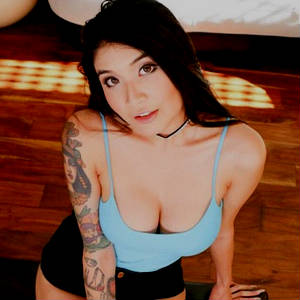 In Dirty Daughter, Dirtier Stepmom, Sparks plays a young stepdaughter excited to introduce her new boyfriend Johnny to her mom. But after five minutes alone with him, her mom already has her claws dug into Johnny. Brenna and Johnny head out for date night and then come home and have some wild sex. Brenna falls asleep and Richelle sneaks into her room to have her way with Johnny… finally. But, when Brenna starts stroking herself and Johnny catches her, he knows something’s up. It’s a little mother-daughter game that Richelle and Brenna like to play. And lucky Johnny gets to take both ladies for a ride.

The scene has already been viewed 20k times. The trailer and the full scene can be seen at http://www.teamskeet.com/t1/trailer/view/dirty_daughter_dirtier_stepmom/brenna_sparks_and_richelle_ryan?type=low_res&trailer=a.

“Working with Johnny and Richelle was hot and the scene was even hotter,” says Sparks. “It was fun to have him alone and tag team him with Richelle. If you’re not a member of Team Skeet, now is the time to join to see our exclusive scene and high res photo set.”

Sparks always brings her fans with her on set…well, the ones who join her Only Fans. Her fans can see what life on and off set is like for Sparks by joining her Brenna Sparks Only Fans account.

Webmasters can promote and profit from Sparks’ appearances at multiple Team Skeet sites by joining the PaperStreetCash affiliate program.

Known for her exotic Laotian looks, vivacious onscreen performances, and her bubbly personality, Brenna Sparks is one to watch. With a little over two years in the biz, the playful, tatted, Asian starlet has worked for many top-shelf studios like Evil Angel, Digital Playground, Brazzers, Reality Kings, Burning Angel, Bang Bros., and Digital Sin, scored the role of a lifetime by being cast in WoodRocket’s Dragon Ball Z parody, and garnered a 2018 AVN Awards Fan Voting nomination for Hottest Newcomer. Besides receiving multiple AVN and XBIZ Awards nominations for her scene work, she has received Hottest Newcomer and Crossover Star of the Year for her crypto work. In 2019, she scored her first AltPorn Awards nom for Best Cam Girl.

Before working in adult, she was a stripper and did a brief stint in nursing school. When she’s not filming or camming, she’s serving as a SpankChain Advisor and investing in the cryptocurrency market, and was even voted as one Coindesk Top 10 Influencers in 2018. 2018 also brought multiple covers and features that includes September issue of Xcitement and the December issue of StripLV Magazine. Brenna scored the cover and feature of Xcitement Magazine’s September 2018 issue.

Keep up with everything in her world by following her on Twitter @brennasparksxxx and Instagram at @brennasparksofficial. Become a member of her Only Fans https://onlyfans.com/brennasparks and see what really goes on while she’s on and off set. Also, buy her exclusive clips on ManyVids https://www.manyvids.com/Profile/1000193900/brennasparks/.

For her Premium Snap see https://fancentro.com/brennasparks.

To interview Brenna Sparks for your site, show, or publication, contact Erika Icon of The Rub PR at erika@therubpr.com.