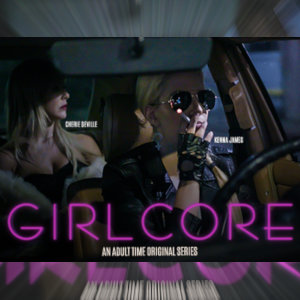 (Montreal, QC) October 23, 2018 – Gamma Films, the award-winning producers of Pure Taboo and Girlsway, is taking a trip back to the ’80s with the first season of its new lesbian anthology series from AdultTime, Girlcore, available October 23 exclusively at Girlcore.com.

The six-part original series that pays homage to the 1980s and classic pulp fiction “is going to be offered to all the members within AdultTime, which will include all of Girlsway’s members, as well as being launched as Girlcore.com to attract new audiences into our ecosystem,” said Gamma Films’ Head of Production Bree Mills.

“This is a series that’s been about six months in the making… I drew my inspiration from a genre of pulp fiction that was very popular in the ’50s and ’60s – it’s often been dubbed ‘sexploitation literature’ or lesbian pulp novels. For a whole generation of people, it was the only representation that existed out there for what being a gay person was.”

Girlcore’s episode listing is as follows:

The first season of the series gives a nod to the cinematic works of the time period, with each scene edited in widescreen format with a dreamy ’80s synth soundtrack courtesy of Canadian artist Pilotpriest.

The shows are available to purchase at Girlcore.com, and members of one of Gamma Films’ network of websites can access Girlcore for free. Contact affiliate manager Derrick Gilbert at derrick@famedollars.com.

Affiliates can promote Girlcore and the Gamma Films network of sites by signing up with the FameDollars webmaster program.

Season One takes on the colorful ’80s when sexuality was in full swing and people were beginning to experiment openly and with abandon. As Mills told AVN, I have a lot of personal nostalgia about this decade and I knew I wanted to use this series to create a time capsule as sort of a personal filmmaking challenge.

No spam, notifications only about new products, updates.
PrevPreviousTaylor Stevens To Press The Flesh With Fans At EXXXOTICA New Jersey 2018
NextXBLAZE Sparks Massive Interest in Wake of Legal Canadian Cannabis SalesNext
On Key