Imlive Returns As Platinum Sponsor Of The 2019 YNOT Cam Awards 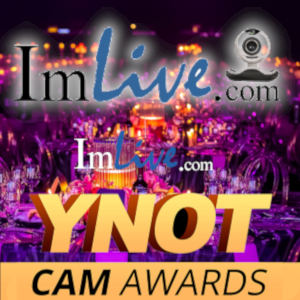 (Hollywood, CA) April 16, 2019 – YNOT Events is pleased to announce that popular international webcam platform ImLive is returning as a Platinum Sponsor of the 2019 YNOT Cam Awards in Hollywood. Platinum sponsorship is the highest level of sponsorship available for the YNOT Cam Awards and is limited to just four sponsors total.

Shay from ImLive said his company believes in YNOT’s mission to support, grow and connect the live cam model community in the United States market.

“Imlive is thrilled to sponsor the YNOT Cam Awards in August,” says Shay. “We think YNOT’s agenda to build up the US-based webcam model community is extremely important and has never been done before. As a worldwide webcam platform, we always value the opportunity to get to know local models in any of the countries our members are from, and the US market is one of the most important markets for any webcam platform, so the YNOT Cam Awards has great value for us.”

YNOT owner Connor Young says ImLive is a company that is willing to invest in the growth of the cam sector and the success of its performers.

“We are huge fans of ImLive and so happy to once again have their support for the YNOT Cam Awards and for its mission to spotlight the amazing work done by our industry’s live cam performers,” says Young, who is also YNOT’s CEO. “ImLive is always in the lead on investing back into our industry and its models, and we’re truly honored to have them return to Hollywood with us in 2019.”

The YNOT Cam Awards will take place on August 7th at the iconic Avalon Hollywood, located just yards away from the famous interaction of Hollywood & Vine. The Red Carpet event will stream live from Vine Street, and in-person VIP guests will enjoy pre-show entertainment, full dinner and open bar, the cam sector’s biggest awards show of the year, and a festive after party. While attendance is industry-only, the event will be live-streamed online for fans around the world to watch their favorite webcam performers go Hollywood.

“ImLive sees its sponsorship of YNOT’s events in Hollywood as a great opportunity to grow our relationships with US-based studios and to enhance our model outreach, so we look forward to it.”

Young also points out that ImLive’s video during the 2018 YNOT Cam Awards was a great moment in the show.

“We ask our sponsors to put together short videos that are entertaining, funny and help communicate their companies’ values with respect to the live cam sector,” says Young. “ImLive’s video really knocked it out of the park, and a lot of people were talking about it after the show was concluded. It’s up on YouTube if you haven’t seen it yet, it’s really worth a watch.”

This year in Hollywood the YNOT Cam Awards will be boosted by the all-new #Cammunity show, a multi-day model summit taking place August 5th through 7th at the W Hollywood Hotel. #Cammunity will feature several days of educational sessions, workshops, networking opportunities and epic Hollywood parties. Then the YNOT Cam Awards will cap off the celebration of live cam and clips performers with its big return to the very heart of the American entertainment industry.

YNOT will start accepting suggestions for 2019 award nominees starting in mid-May. For those companies interested in participating in the YNOT Cam Awards, please contact YNOT for more details.

The YNOT Cam Awards in Hollywood, California was created to recognize top webcam and clips models from the adult interactive community. The event seeks to highlight how the interactive nature of the internet has transformed the way that fans think about adult entertainment and its performers. YNOT Cam Awards brings together top models with business professionals from the leading webcam networks, studios and service providers for a glamorous night in the heart of Hollywood. It demonstrates how interactive webcam technologies empower adult performers in ways not previously possible, and also provide fans with a more authentic and rewarding experience that better serves their needs for rewarding human social interaction.