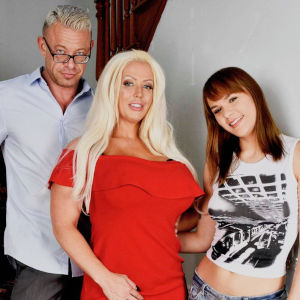 (Hollywood, CA) September 29, 2018 – Adult Indie Filmmaker Adam Christopher has taken on one of the biggest projects of his career, a remake of Vivid’s Bad Wives, and will be out tomorrow, Sunday, September 30th on VOD, in time for consideration for awards season.

The original Bad Wives was made in 1997 for Vivid — it was directed by Hall of Famer Paul Thomas and starred Dyanna Lauren, Melissa Hill, and Steven St. Croix. It was dubbed as one of the greatest adult films of all time and won numerous awards.

In 2017, Adam met with Paul Thomas while shooting a documentary. They discussed Bad Wives and the possibility of Adam shooting a remake. Paul wished Adam luck and gave him his blessing to make the movie. Now one year later, after four months of preproduction, tedious script writing, hiring the crew and talent, and a week of shooting, the remake of “Bad Wives” is here and it’s Adam’s first original feature movie.

The plot of the movie revolves around two housewives, Tracey Jo (Alura Jenson) and Elizabeth (Edyn Blair), who are experiencing major marriage issues. Tracey Jo’s daughter is having an affair with her new husband, Guy, which has turned her into an alcoholic. Elizabeth is becoming mentally unstable because her husband, Steve, is emotionally abusive and cheating on her. All their lives are changed when they meet a mysterious bartender named Roy (Adam Christopher), who seduces and manipulates them into doing something very dark and drastic.

“This project is 20 years in the making,” says Adam Christopher “It was an honor to meet PT a year ago. We talked at length about his career, Bad Wives, and how both him and the movie were influential to my career as a director in adult. He even gave me his blessing to do this revamped updated version of his classic film. I went all in on this project – I rewrote the script, hired amazing talent, and got the old-school flavor by bringing on Chris King, who’s been shooting porn since the 1990s. This film has several homages to the original and we even remixed some of the original music.”

“Adam approached me two years ago when he was writing the script, and I was impressed with this young filmmaker and his idea of a major movie remake, which seemed impossible for an independent studio,” says Jenson. “Adam directed a few scenes that I performed in, and all on his own budget. I was humbled and inspired with his confidence and enthusiasm. I was going through a terrible divorce, before he even considered doing the remake. Being in this film helped me close that chapter of my life. Adam did an amazing job on the film, provided an exceptional environment on set from start to finish, and wowed the cast with his vision and skill. The adult industry is witnessing the precipice of an extraordinary shift in entertainment… all at the hands of a dude who looks like Jeff Goldblum’s illegitimate son.”

In 2019, Christopher will release Stolen Cookie, a short documentary on DVD about his remake of Bad Wives, featuring Paul Thomas and Steven St. Croix, one of the original stars.

Keep up with everything in Adam’s world by checking out his site https://www.adamruinsporn.com/ and following him on Twitter at @TarantinoXXX and Instagram at @adamruinsig.

To interview Adam Christopher for your site, publication or show, contact Erika Icon of The Rub PR at erika@therubpr.com.