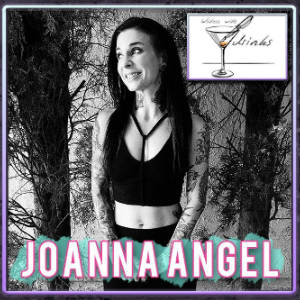 “This is a very unique event and I am so honored to be a part of it!” said Angel. “I haven’t hit I truly look forward to an evening with writers… and drinks, in a city that celebrates sexuality like no one else does.”

Author and performance artist Charlie Jane Anders will host the bi-monthly show, which forwards all guest admission proceeds to the Center for Sex and Culture (www.sexandculture.org).

To find out more about Angel’s upcoming appearance at ‘Writers with Drinks’, visit www.writerswithdrinks.com, on Facebook and www.makeoutroom.com, as well as at BurningAngel’s Writers+with+Drinks events page.

For more information please visit: BurningAngel.com and www.JoannaAngel.com. Webmasters can profit hugely from both sites by joining the FameDollars.com affiliate program.

About Joanna Angel and BurningAngel

Pushing the envelope, the BurningAngel empire is a refreshingly unique web cocktail of sex, rock n’ roll and pop culture. BurningAngel.com launched in 2002 with a few sets of photos and a band interview, conceived by two amateur college kids from Rutgers University, Joanna Angel and Mitch Fontaine. It has since exploded into a fierce indie company, pioneering a new species of erotica known as “alt porn,” with a network of websites and hundreds of DVDs to its credit. BurningAngel is revered for popularizing alternative-style girls, and prides itself on delivering hardcore adult content alongside band interviews, record reviews and its own social networking community.

As both the star of many of BurningAngel’s movies and company spokesperson/owner, Angel has stormed both mainstream and adult media. She has appeared on the cover of every major adult magazine (AVN, Club, Hustler, Picture Magazine, Adam Film World, Xtreme and more), and has been featured in numerous tattoo magazines as well (some include Prick, Taboo, Inked and Savage). Angel has been featured on Fox News, Playboy TV, Fuse TV, G4 TV, KROQ Radio, as a regular on the Jason Ellis show on SIRIUS Radio, as a guest on the series premiere of TLC’s LA Ink and in a speaking role on Adult Swim’s Children’s Hospital. She has also appeared in The New York Times, Newsweek, Inc. Magazine, The Village Voice, The New York Press, Esquire UK, Details and Penthouse, among others. Heeb Magazine featured Angel as its cover girl, naming her one of the Top 100 Up-and-Coming Jews in 2005; the New York Post featured her as one of the Top 25 Sexiest New Yorkers, and Playboy.com named Angel one of the 50 Hottest Adult Stars on Instagram. Angel also co-hosted the 2016 AVN Awards in Las Vegas, Nevada.

From a college dorm room to national television, Joanna Angel and BurningAngel have made their mark in entertainment, and it’s only just beginning.