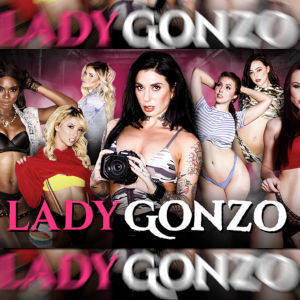 Angel, who shot the premiere alongside veteran cinematographer Mike Quasar, stars in the 52-minute scene with Whitney Wright, who is more than ready to get on the ride of a lifetime with Angel and Juan Lucho in a scorching three-way, Lady Gonzo-style.

The founder of BurningAngel Entertainment recently signed a multi-year producer agreement with Gamma Films, and in February 2019, Angel’s company will formally become part of Adult Time. Angel will remain the primary producer of BurningAngel and work closely with Gamma’s Head of Production, Bree Mills.

“It’s the first time I’ve actually gotten to experiment with shooting camera and it’s incredibly thrilling and empowering for me. My very amateur camerawork has a certain, um… charm, but Quasar’s professional cinematography right beside me ties it all together.

Lady Gonzo is now accessible to all members of Gamma Films studios’ sites, as well as the new Adult Time platform; those interested in sneaking a peek or purchasing the series can visit to sign up and subscribe to Adult Time’s entire catalog of award-winning content, giving its members access to over 50,000 scenes within the Gamma Films studio network, including Joanna Angel and BurningAngel Entertainment’s new content.

Webmasters can make crazy dollars promoting Angel and all of the Gamma network by signing up with the FameDollars affiliate program.