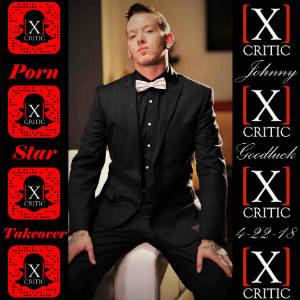 “I chose a weekend day so I could do something different for my Snapchat takeover,” said Goodluck. “I’m honored to be the first guy to do a takeover for them and can’t wait until Sunday. If you’re in the Los Angeles area, feel free to stop by Mr. Furley’s in Sherman Oaks. Anyone who comes down will get a special drink at a special price.”

After the takeover, make sure to sign up for his Premium Snapchat at https://fancentro.com/johnnygoodluck to keep up with his adventures on and off set.

Keep up with everything in Mr. Goodluck’s world by following him on Twitter @MrGoodluckXXX, Instagram johnnygoodluckxx, and his Facebook performer page facebook.com/MrJohnnyGoodluck. Pay to watch him with some of the most beautiful women in adult by joining his brand new official site https://johnnygoodluck.com/ or buy his videos there individually. Fans can also support him by subscribing to his OnlyFans onlyfans.com/mrgoodluckxxx and FanCentro Premium Snapchat https://fancentro.com/johnnygoodluck.

To interview Johnny Goodluck for your site, publication, or show, contact Erika Icon of The Rub PR at erika@therubpr.com.