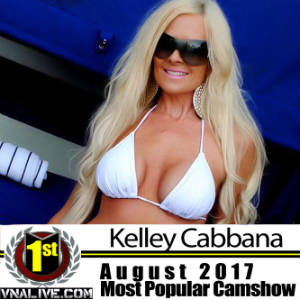 This is the second time Cabbana has won the monthly award, having won in May. She has also finished second twice. Click the following for a complete list of the VNALive monthly winners and the best of the VNA Army to promote.

Cabbana is a Florida native who got her start in mainstream print modeling for companies such as Harley Davidson. She entered adult with an appearance on Playboy TV on a show called Foursome. In 2011 she launched her own site, KelleyCabbana.com, featuring exclusive videos and webcam shows.

After meeting Vette at Exxxotica New Jersey in 2015, Cabbana started using VNALive as a platform to do her weekly member shows and is now one of the most popular performers, with shows most Wednesday evenings.

VNALive was launched by Vette in October 2012 as a cam platform for solo girls to add live group shows to their membership sites. Custom designed and built, Vette (and her site, wink) hosts and runs VNALive herself. It is 100% mobile friendly (all live shows can be watched on a phone).

Any model (or webmaster) with a membership site can add VNALive to their site (in usually 30 minutes or less). Superstars such as Julia Ann, Nikki Benz, Sunny Lane, Tasha Reign, Penny Pax, Jelena Jensen and Sara Jay all use VNALive, as well as popular solo girls like Honey White, Lelu Love and Akira Lane in the USA, Louise Jenson and Rebekah Dee in England, Daisy Destin in Canada, the girls from the Dreamnet.com network, BBWs such as Sam 38G, Maria Moore, Kimmie Kaboom & Kristi Maxx. The most popular monthly girl wins $250. Second place wins $150. Third wins $100.

“I was thrilled when I won once this year. To win for a second time is awesome! A huge thank you to the fans at VNALive and the members of my site, who voted me #1 again” said Cabanna. “If you haven’t been to one of my member shows, grab a membership to KelleyCabbana.com and check me out! My award winning shows are always free with a monthly membership.”

“Kelley really is impressing a lot of people with her live shows. She’s bubbly, fun and very interactive which is why a lot of the viewers love her,” said Vette. “We have now broadcast over 13,000 membership shows and there is someone online day and night, 365 days a year… even during a hurricane.”

Webmasters can join the onwards march of Cabbana and all the other “privates” in the VNA Army can sign up with Vette’s own Sticky Dollars affiliate program.

Site operators or models interested in  camming or adding VNALive can reach Vette at Vicky@VetteNationLive.com.