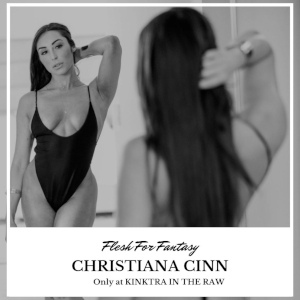 (Hollywood, CA) December 28, 2018 – Jane Jett’s Kinktra in the Raw has brought in many guests to appear on their podcast, but this week, adult star, Penthouse Pet, and former Playboy model Christiana Cinn shows that she’s truly one-of-a-kind on Episode 21.

The first words that come to mind for host Jett when she thinks of Cinn is “oh la la“. The ‘Flesh for Fantasy with Christiana Cinn’ podcast touches on Miss Cinn’s fetishes, including cosplaying as Pokemon’s Pikachu, pet play, and being a switch. The ladies also play with her Penthouse Stroker. Jette also delves deep into the multi-faceted Cinn’s love of performing for others, including her feature dancing, training in ballet and tap, and her band Hot Sauce Holiday, with whom she wrote, produced and performed a rock opera and is currently enjoying a monthly residency at El Cid.

“Christiana is truly the most sensational vixen, and I enjoyed having her on the podcast,” says Jett. “She has a larger than life personality and undeniable allure. Although she’s achieved great stardom, she keeps her feet on the ground. Listen to Episode 21, and you will fall in love with her, too!”