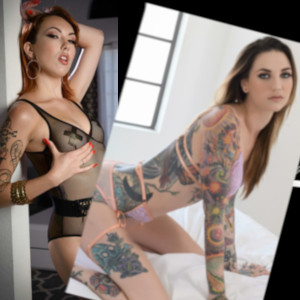 (Hollywood CA) December 12, 2018 – Kinktra in the Raw is quickly becoming one of the most popular podcasts that showcases the best adult stars, sexperts, and more. The latest episode to unwrap and make your holidays even merrier premieres today with Jane Jett welcoming Kinky Scissor Sisters Emily Blacc and Rocky Emerson.

“Emily is the first guest we’ve had on twice, and she’s just amazing!” says Jett. “We are so lucky to have her on the podcast again, and her super-hot friend Rocky Emerson. This episode is educational, as well as entertaining, and you don’t want to miss it.”

The Kinky Scissors Sisters episode and previous podcasts can be found on Jane Jett’s recently launched site https://www.kinktra.com. Links to the podcast on Spotify, iTunes, Google Play, and Stitcher can also be found on her site. Previous guests include Marica Hase, Daizy Cooper, Annie Cruz, Joanna Angel, and April Flores!

No spam, notifications only about new products, updates.
PrevPreviousLance Hart Scores Three 2019 GayVN Nominations for Scene Work
NextMan Up Films Celebrates The Holidays With… Men Getting Weird With Each OtherNext
On Key