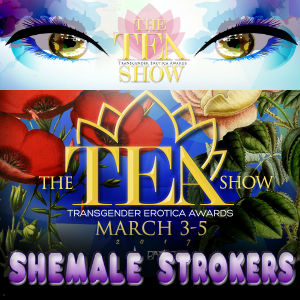 In addition to multiple nominations, Mancini Productions is also a sponsor of the of the TEAs. They are sponsoring the She-Male Strokers‘ Stroker of the Year award. The winner will be announced at the show and receive $500 and two photo shoots with the infamous website. In 2016, Sasha Skyes won the coveted award.

“We’re honored to receive multiple nominations from the TEAs again this year, and we’re excited to be a sponsor again this year,” says Mancini. “We’d like to thank Steven [Grooby, TEAcon founder] and his team for having such an amazing event every year that reveres the trans community.”

The 9th annual Transgender Erotica Awards are set to take place on Sunday, March 5th, 2017 at the Avalon in Hollywood, California.

All Mancini Productions’ DVDs, VOD and more are available through your favorite adult e-tailers, including Adult Empire at http://shemale-strokers.empirestores.co/streaming-video-on-demand.

Webmasters interested in promoting these potentially award-winning productions can do so by joining the AdultEmpireCash affiliate program; to promote SheMaleStrokers sign up for the combined RodneyBucks/SheMaleStrokerBucks program.