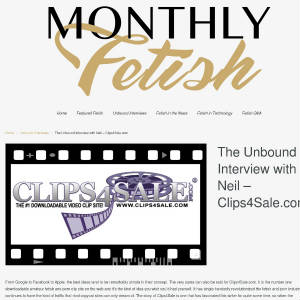 (Tampa, FL) April 12, 2017 – Clips4Sale Founder and Owner Neil was interviewed by Monthly Fetish, an online fetish magazine that debuted last week. Clips4Sale is also one of the online zine’s sponsors and their banner is prominently featured on the home page.

In a rare but candid interview, Neil is interviewed by Monthly Fetish for their Unbound Interviews. The article covers how Neil started Clips4Sale, how he worked to establish himself as a clips producer and owner, the competition, what’s next for C4S, and much more. Despite all his success, Neil is very humble, accessible, and treats big and small models and producers with the same respect – this is one of the huge components that have led to his site’s success. The article also features photos from Clips4Sale’s booths at previous trade shows with their talent, including spokes model Ashley Fires.

“I’m glad to see that this site has popped up and is opening up fetishes to everyone,” says Neil. “People are always curious and have questions, but are afraid to ask. Monthly Fetish will give people a new arena to not only find answers to their questions, but also pose the questions. I’m honored they chose to interview me in their debut issue.”

Owned by XIX Media Group, Monthly Fetish isn’t just geared at professional kinksters, but also for the fans of 50 Shades of Grey or anyone who is curious about fetish, but doesn’t know where to begin. Each month, the site features a theme and this month it’s “What Is a Fetish?”. There are also sections dedicated to fetish in the news and technology, and readers can also write in anonymously to ask anything about fetish.