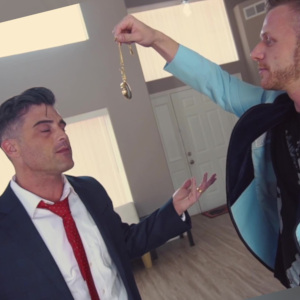 (Las Vegas, NV) May 10, 2019 – Man Up Films is infamous for delivering their members the best videos of men getting weird with each other. Two new, mind-bending, exclusive scenes are now available featuring some of the top male talent in the biz directed by Lance Hart.

“Hot Cop Gets Mind Fucked by Wesley Woods” is mesmerizing. Evil mentalist Wesley Woods is using his powers to take advantage of Officer Liam Cyber – he’s got him licking shoes, clucking like a chicken and whipping out his giant cock for Wesley to blow. Even though Officer Cyber thinks he’s out of the trance, the mind control continues with him on his knees servicing Wesley and eventually fucking him in the ass. This is one officer being collared by his perp. Who will be the winner? You’ll have to watch “Hot Cop Gets Mind Fucked by Wesley Woods.”

Detective Lance is investigating Brian Bond who’s hoodwinking hot men out of all their cash. Lance confronts Brian, but Brian says it’s all free will and whips out his pocket watch to exhibit his mentalist powers. Straight-laced Lance falls under his control and is humiliated and confused, and ultimately put under humiliating suggestions for the night. Will Lance escape his clutches? Watch “Mentalist Brian Woods vs. Lance Hart Part 1” and look for Part 2 on Friday, May 17th.

“It’s awesome to be able to execute such wild script ideas and for the performers to not only be excited but also going above and beyond with their on-screen performances,” says Hart. “Wesley Woods, Liam Cyber, and Brian Bond all killed it with their scenes and of course, we had a hoot onset.”

Both scenes are member exclusives and available only at https://join.manupfilms.com/track/Mi4xLjIuMi40NS4wLjAuMC4w.

Become a Man Up Films affiliate and make exceptional money. Lance is with his webmasters every step of the way, catering to their needs and giving them incomparable marketing tools. Sign up at https://pervoutaffiliates.com/ and start raking in the cash.

No spam, notifications only about new products, updates.
PrevPreviousRiley Reyes Is a Triple Threat with New Girlsway & Bang! Scenes
NextSarah Vandella Returns to SwallowedNext
On Key