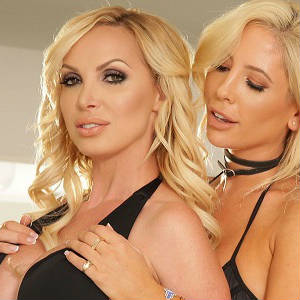 (Hollywood, CA) September 30, 2017 – Superstars Nikki Benz and Tasha Reign are proud to announce the release of their all-new scene together exclusively available at their Official Sites NikkiBenz.com & TashaReign.com.

It is Benz’ first scene after worldwide reports of problems encountered on set with Tony T in December. The new scene can be streamed or downloaded and is available for members to watch on mobile phones.

Benz is a Hall of Fame and Penthouse Pet of the Year and one of the very few with verified accounts on Instagram (1.9 million followers), Facebook, and Twitter (over 874,000 followers) and is also one of the most viewed adult stars on SnapChat (user: benzmafia). She is a Fleshlight girl.

Reign is also a Penthouse Pet and just won honors at AVN for Best Performer Website for TashaReign.com. It’s been another busy year for Reign who released Hard Reign 2 with Elegant Angel, shoots for her Official Site and has another upcoming contract, to be announced. She is the current Chairperson of APAC (Adult Performers Advocacy Committee).

“I needed to take time off from shooting. I had quite a traumatic experience last December,” says Benz. “My fans and peers have been very supportive. Thank you for understanding that it was important for me to take a step back and retreat for a little while. I’ll never truly recover from that experience, however, I’m working on myself daily to become a happier person. I’ll end it there on that topic for now.

“This is my first scene back and I’m excited to have my VNA sister in it with me. Thank you Tasha for being such a professional and a delight to work with. Thank you for helping me produce this scene. I’m very proud of us both! Thank you Benz Mafia for your love and support.”

“I was stoked when Nikki asked if me if I wanted to shoot again! She’s the best, she’s my exact taste in women,” says Reign. “Between her Benz Mafia and my Reigndeer, our fans are loyal and curated and I’m sure they will love what we shot. All of our scenes have been fire and I can’t wait until the next.”

Benz and Tasha’s Official Sites are both part of the popular VNAGirls.com Network, all and any of which can be promoted by signing up with Vicky Vette’s StickyDollars webmaster program.

Benz is the 2011 Penthouse Pet of the Year. Benz is in the Top 10 Most Followed Girls on Twitter (http://www.fameregistry.com/top-twitter-porn-stars/) and she is the only adult star with her own WhoSay page. Mainstream appearances include Fox Sports’ “Cubed”. Benz can be seen in the 2013 Hollywood blockbuster Pain & Gain directed by Michael Bay and starring Mark Wahlberg & the Rock. Howard Stern awarded her the title of the “World’s Strongest Naked Woman”. Benz was also featured in the music video “Lose Yourself” from the mainstream movie My Trip Back from the Dark Side.

Benz can be found online at: