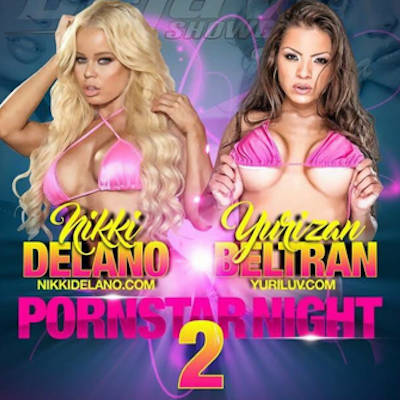 Patrons of Déjà Vu Tijuana will be treated to multiple shows and the audience is encouraged to participate in Delano’s high-energy shows. In between sets, Delano and Beltran will be available for Meet & Greets to sign autographs and take photos with fans. Delano will also be selling exclusive merchandise, and fans will also be able to purchase VIP lap dances from the adult star.

“I’m excited to take the stage and meet my fans in Mexico,” says Delano. “My fans in Southern California should also come join the party since it’s just a few hours away. Make sure to get there early and get a front row seat so you don’t miss a minute of the action.”

Known as the largest strip club in the world, Déjà Vu Tijuana is over 100,000 square feet and the height of luxury and good times, with 3 floors, 6 stages, 15 skyboxes, 3 liquor bars, full-service spa suites, and full kitchen. It’s just a two-hour drive from Los Angeles and, at three minutes over the border, the club itself provides free shuttle service. Get a VIP that includes a limo by going tohttp://dejavutijuana.com/vip-pass. Déjà Vu Tijuana in located at the Plaza Pueblo Amigo at Via Oriente 9211. Visit DejaVuTijuana.com or call 877.761.7077 for more info.