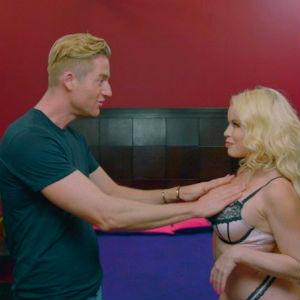 (Hollywood, CA) Adult Star Nikki Delano appears in a segment of the Belgian reality show Jani Gaat that aired Monday night in Belgium and throughout Europe.

Jani Gaat is  a Flemish reality series hosted by Jani Kazaltzis and his adventures discovering unusual aspects of our world.

“I have fans all over the world. I love my European fans and hope many of them get to see the show,” says Delano. “I enjoyed my segment with Jani not only because it was fun to film and he’s so crazy, but also because it shows the adult industry in a positive light.”

Jani Kazaltzis is Flanders’ most famous male stylist. Already in its 2nd season, his reality show puts Kazaltzis in worlds outside his comfort zone, including training with a group of paratroopers at boot camp and spending a few days on a fishing boat on the North Sea with sailors. Kazaltzis’s approach is always comedic and sometimes outright silly – he’s like Borat, but always positive and respectful. The show has been a huge hit in Belgium and airs weekly.