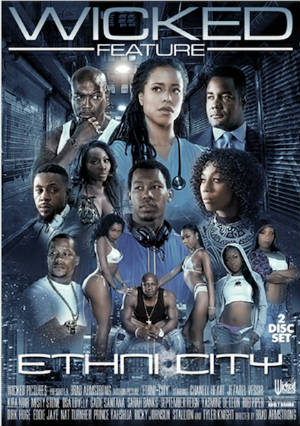 (Los Angeles, CA) February 24, 2017 – Ricky Johnson is one of the stars of Wicked Pictures‘ feature film Ethnicity, or Ethni*city. Directed by multi award-winning director Brad Armstrong, Ethnicity isn’t your stereotypical portrayal of the Black community – it covers a broad scope of the population from lawyers to doctors to police officers to single moms. Set in L.A., Ethnicity is shot like a music video with lots of L.A. cityscape shots, but it also has depth in the development of the characters and story line.

Johnson plays Tyrell, a gangster whose sister is urging him to live a better life. Tyrell finds himself caught between the gangster life and doing something better for himself. The real question is: will Tyrell make the right choice? And of course, there’s mind-blowing sex – he’s paired with Sadie Santana and Jezabel Vassir in a double BJ scene. Ethnicity also stars a huge cast including Prince Yahshua, Channel Heart, Kira Noir, Misty Stone, Osa Lovely, Yasmine De Leon, Nat Turnher, Tyler Knight, and many more. It’s out now and the SFW Ethnicity trailer can be viewed on Youtube.

“I was honored to be part of such a ground-breaking project – it’s Wicked’s first all-Black film, and I’ve always wanted to work with Brad,” says Johnson. “The movie is really amazing and a definite must-see if you like a great plot that ends up with an amazing twist and, of course, hot sex.”

Johnson’s been a busy body in the business lately; he is also appearing in a brand-new scene on Dogfart’s Blacks on Cougars with the legendary Julia Ann, who plays a doctor helping him with his shin splints and a whole lot more – click this to watch the trailer and scene at http://www.dogfartnetwork.com/tour/sites/BlacksOnCougars/julia_ann_2/. Also, pick up 3rd Degree’s My Mom’s Dark Secret DVD and see Johnson in a smoking hot scene with Mercedes Carrera.

Promote Ethnicity and other major Wicked productions by signing up with WickedBucks.com, their official affiliate program.