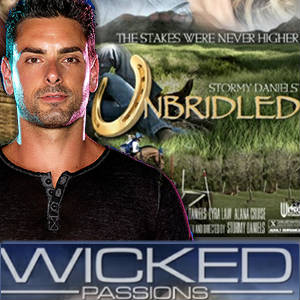 After losing her horse in a tragic accident, Avery (played by Stormy Daniels) gives up riding and moves to NYC. Her company gets a plum gig hosting the opening of swank art gallery owned by Darren (played by Driller). Driller and Daniels have a steamy scene together after their business transaction is over, and then she’s called back to help save her family’s ranch.

Directed by and starring Daniels, Unbridled is the story of how the Montgomery Family saves their ranch… or do they? The feature also stars Lyra Law, Rachel Starr, Alana Cruise, Kayla Paige, Marcus London, Michael Vegas, Jay Crew, and Dick Chibbles.

Watch the SFW trailer at https://www.youtube.com/watch?v=HYmr-JESlgc.

“Working with Stormy is always great and it was fun playing a gallery owner,” says Driller. “The film is really amazing, with a great storyline and really hot sex. It’s the perfect movie for couples. Make it a Wicked Wednesday and pick the DVD up today.”

Driller is still campaigning for votes to help him win NightMoves Awards’ Best Male Performer. In 2015, he took home the award and he’s hoping to win again in 2017. Votes can be cast until September 15th at http://www.nightmovesonline.com/voting/index.php?sid=82189. The awards are set to take place on Sunday, October 8th at Tampa’s Thee Doll House. For more information about NightMoves, go to http://nightmovesonline.com/.

Webmasters can turn traffic to money by promoting Driller’s latest and more Wicked Pictures via the WickedBucks affiliate program.