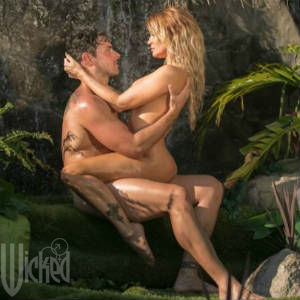 (Hollywood, CA) September 23, 2017 – Ryan Driller has two new Wicked Pictures titles that have come out in the past week, making it a doubly wicked week for him.

Wicked’s latest feature streeted this week. From Beyond is the tragic tale of couple Sofia (Chanel Preston) and Michael (Ryan McLane). Michael is killed and Sofia wants answers from Michael’s friend (Marcus London) – which puts her in real danger. Will Michael protect her from beyond the grave? You’ll have to watch to find out. Driller has some dialogue in the film and a sultry scene with Ella Nova. Written and directed by Stormy Daniels, From Beyond also stars Moka Mora, Aaliyah Love, and Jay Smooth. View the trailer at https://www.wickedb2b.com/movies/from-beyond.

Ryan’s second Wicked title is Jessica Drake Is Wicked. The showcase features many firsts for the Wicked contract star. In the first scene of Jessica Drake Is Wicked, Driller and Drake are in the garden of Eden with the snake and the apple, a kind of modern day Adam & Eve. The beautifully shot scene is a passionate encounter. The star-studded flick is directed by Brad Armstrong, and also stars Ricky Johnson, Anna Bell Peaks, Vicki Chase, Angela White and more. See the trailer at https://www.wickedb2b.com/movies/jessica-drake-is-wicked.

“Wicked is pulling out all the stops for awards season consideration,” says Driller. “Both films are epic, and I’m honored to be in both. Add them to your collection, you definitely won’t regret it.”