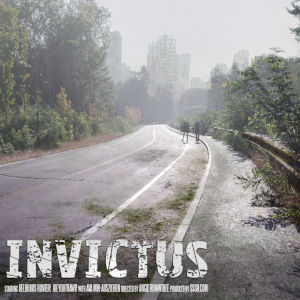 (Boston, MA) October 26 – Adult film director and founder of Sssh.com, Angie Rowntree has released a non-explicit, R-rated version of her latest film, Invictus, with the goal of driving widespread release to reach new audiences with this important message.

“Invictus is the first of my films in which I’ve touched on politics and issues that are important to me,” said Rowntree. “In making available an R-rated version people can watch for free, my hope is that I can introduce Invictus to more people and encourage discussion about the extreme challenges and difficulties humanity could soon face, unless we get serious about addressing things like climate change, extreme nationalism and governmental corruption.”

As she struggles to survive the wasteland which surrounds her and make it to the rendezvous point where she is to meet a former colleague, she encounters Paul Young (Joeydotrawr, Hunter’s husband in real life). Paul is a journalist who escaped the government’s crackdown on the independent press and has been in hiding ever since.

At first out of curiosity, then later as a devoted convert to her cause, Paul joins Jane on her quest to fight back against the forces which continue to tear the world apart.

“I loved playing Jane Darling,” said Hunter. “The character of Jane that Angie created is a combination of soft yet badass, strong yet breakable. There are so many reasons why this film is important from political, environmental, social and civil issues. I’m proud and honored to have been part of this movie. Sssh.com and Angie are true visionaries in how they combine powerful storylines with the beautiful rawness of sex.”

“Jane is not a victim, not merely a survivor, but a fighter,” said Hunter. “It’s important that women are represented as diverse and strong in their own right.”

Critics who have reviewed it have taken note of how Invictus, like much of Rowntree’s previous work, delves into territory which is non-traditional for an adult film, yet compelling and thought provoking.

“Invictus is as much a tale steeped in symbolism as it is an adult film highlighting nudity and lovemaking. Because it is a rare combination of literary expression and art mixed with see-it-all sex,” wrote film reviewer and author Rich Moreland (@pornofeminism). “Is Invictus part of an alternative genre created by independent filmmakers who believe uninhibited sexual expression is part of their storytelling and, by extension, the development of their characters? Invictus does just that.”

The free R-rated version of Invictus is available at https://sssh.com/invictus_r/.

Sssh.com can be promoted by the right webmasters by joining SpiceCash, the Sssh.com affiliate program.