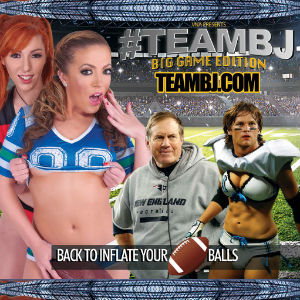 One of the first-ever adult hashtag phenomenons on Twitter, #TeamBJ returns for the Superbowl. Adult stars Lauren Phillips & Carmen Valentina are promising ALL their twitter followers BJs if the New England Patriots beat the Atlanta Falcons in Superbowl 51 this Sunday, February 5.

A video of the TeamBJ pledge by the girls can be found on YouTube or at TeamBJ.com. The girls started the playoffs backing the Packers, Patriots, Cowboys and Chiefs. Only the Patriots have a shot at glory for followers to collect.

#TeamBJ burst to fame in 2010 when Bobbi Eden, with help from Vicky Vette and Gabby Quinteros, promised BJs if Holland won the World Cup. Overnight, #TeamBJ became the talk of the Huffington Post, Yahoo Sports, ESPN and just about every sports station in the USA and around the world.

Undeterred, in 2012, Sara Jay and Angelina Castro took up the #TeamBJ torch, promising all their followers BJs if the Miami Heat won the NBA Title. Several high-profile media appearances resulted, such as on the Russell Brand show on the FX Network. The Heat won the title and Jay & Castro delivered on their promise (releasing a DVD and live the event live as proof).

Two years ago, in 2014 #TeamBJ returned for a third tour of duty as Jay and Siri stepped up to promise BJs to all their followers if Germany won the World Cup. Germany took home the trophy, and again the girls delivered on their promise (releasing a DVD and also streaming the event live). More recently #TeamBJ came close (but no cigar) when Castro and Maggie Green promised BJs if Trump LOST the Presidential Election.

This is the 5th installment of the popular series.

Originally from New Jersey, now in California, Lauren Phillips has shot for Wicked, Evil Angel and Devils Films among others. She won her first award in October at the Nightmoves Show with the Miss Congeniality prize. Phillips also just picked up her first-ever AVN nominations (Best VR Scene and Best Group Sex Scene). Based in Florida, Carmen Valentina has been nominated by XBIZ for Best Performer Website (2016) and by AVN for Most Epic Ass & Social Media Star (2017). Carmen performs popular live female wrestling demonstrations at fan conventions such as Exxxotica around the country .

Both Phillips and Valentina are part of the VNAGirls.com network, which has hosted all of the #TeamBJ events.

“I asked Carmen if she wanted to give #TeamBJ a shot for the Superbowl,” said Phillips. “I really do have a fantasy of random twitter followers showing up to collect BJs. I honestly hope that Brady and the Patriots kick some ass this weekend. I’d love to inflate a lot of balls….”

“This is my first ever #TeamBJ so I have no idea what to expect,” said Valentina. “I am nervous and excited at the same time. I will be on the edge of my seat the entire game. I’d love to give Bill Belichick a BJ if the Patriots win… he hardly ever smiles.”

For those counting, Lauren currently has 63,300 followers and Carmen has 355,000 followers.

To qualify for a BJ fans must follow both Carmen and Lauren on Twitter and the Patriots must win the Superbowl. Details on how to collect the BJs will be posted on TeamBJ.com 3 days after the Superbowl.

Webmasters can promote both Phillips’ and Valentina’s sites by joining the Sticky Dollars Affiliate Program.