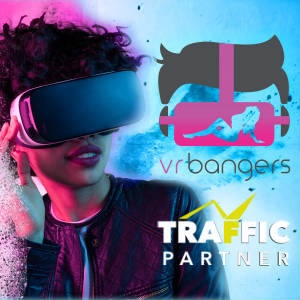 (Europe) – TrafficPartner.com and VR Bangers have announced a promising partnership. As of September 2017, customers of both companies can look forward to captivating enhancements.

Just recently, VRBangers.com revealed plans to expand their services to Europe. While first steps would most likely focus on Germany, due to the country being another strong market for adult entertainment besides the U.S., other regions are supposedly considered as well.

“If there’s a need to convert virtual reality erotica demands strongly, I’m confident that VR Bangers can deliver full satisfaction. Therefore, a partnership became a no-brainer pretty early on,” said Michael Reul, TrafficPartner CEO. “Founders Daniel Abramovich and Boris Smirnoff not only have a similar mindset like us, when it comes to expertise and foresight, but furthermore VR Bangers itself as a product is highly and equally attractive for customers and affiliates.”

VR Bangers is said to be greatly inventive. The company had unveiled a POV (Point of view) head rig for performers in January 2017, introduced eager PlayStation VR owners to their 360° degree content via a hack tutorial and received wide coverage when working to offer the “VR Bangers Hotel Experiences” set to start in real Hotels.

“We’re always looking to take virtual reality further,” explains CTO Boris Smirnoff. “You can’t simply offer unique content only, even when it’s very alluring by itself of course, but rather aim to find even more ways to take VR above and beyond.”

“Virtual Reality seems to become bigger by the minute,” said Reul. “It’s not the exact same momentum as we’ve seen before, when the online adult entertainment industry exploded as a whole, but it looks to remain as part of people’s way to consume media in the near future. So, we’d been on the lookout for a strong brand in this regard and I couldn’t come to think of anyone else but VR Bangers for a partnership.”

Nothing is set in stone yet in terms of a timeline, according to Reul.

“With our structure, we can elevate their availability in no time. From translated menus, to possible CRM methods that make for secondary revenue streams or upgrades to the payment system to meet European demands. There are just so many exciting options, which will benefit our affiliates at the same time, and we’re really looking forward to sharing new developments soon.”

TrafficPartner.com, being an umbrella brand for a huge selection of companies, services and products in the monetization space, seems sure to see its business partners benefit yet again. “We’re constantly evolving and this step will surely cover the virtual reality trend,” said Reul. “If you’re looking to get more information, please contact our team at makemoney@trafficpartner.com or get in touch personally at XBIZ Berlin and September’s other events. We’d be glad to discuss the topic with you and see how you can profit soon!”