YNOT Grand Prix 2018 Heats Up At Phoenix Forum Next Week 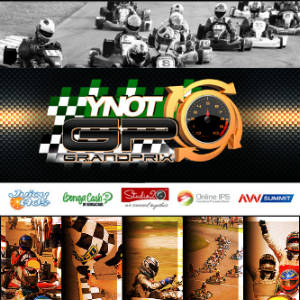 (Phoenix, AZ) March 15, 2018 – After a rainy first leg in Lisbon, the YNOT Grand Prix heads to the arid confines of the Arizona desert for the second race of its ninth season, with the starting flag set to drop at 6pm on March 21, kicking off the ever-popular Phoenix Forum trade show.

Always one of the best attended and most entertaining events at the Forum, this year’s second leg of the YNOT Grand Prix is the only of the season’s four races to take place on U.S. soil. The venue for the race in Phoenix will once again be Octane Raceway, a 1/3 mile track in Scottsdale, which is the only full time indoor/outdoor kart track in the U.S.

“Phoenix is always where the YNOT Grand Prix really starts to heat up – literally and figuratively,” said YNOT co-owner Jay Kopita. “It’s often when we get the first appearance of some of our really good American drivers who weren’t able to participate in the first leg in Europe, so its their first chance to pick up some points and get their name up on the leaderboard.”

Sponsored by JuicyAds, BongaCash, Studio20, International Processing Solution and AWSummit, drivers in the YNOT Grand Prix are competing for a grand prize of $1,000, which will go to the driver who accrues the most points across all four legs of the season.

Under the YNOT GP point system, a first-place finish yields 10 points, second receives 8 points, third receives 6 points, fourth through sixth place finishers get 4 points each and seventh place through the remaining “death match” field which completes the final race get three points each. The participant with the highest point total will be awarded the grand prize following the final race of the season at TES Prague.

Augustin of Gombio enters the second leg as the points leader, having garnered 10 points for his win in Lisbon earlier this month, while Tiago from Akamobi grabbed eight points for second and Martin from Sofarm took six points for his third-place finish.

Kopita said he’s expecting a big field for the race in Phoenix, including both serious contenders and drivers who are just in it for fun.

“Whether you’re racing to win, or just looking for good times, the YNOT Grand Prix is a great way to kick off your trip to the Phoenix Forum,” Kopita said. “I’m anticipating a lot of entrants, so as always, I’m encouraging people to sign up before the show and reserve their spots now.”

In addition to stockpiling points towards winning the grand prize, drivers in Phoenix will have a shot at winning three prizes provided by YNOT Grand Prix sponsor International Processing Solution.

The first prize is a Sonos Play, a compact wireless speaker for streaming music, which is compatible with Alexa devices for voice control purposes. The second prize is a JORLAI rechargeable suitcase turntable, which will also come bundled with two classic albums to spin on the turntable: Sgt. Pepper’s Lonely Hearts Club Band and Led Zeppelin I. The third prize is a DBPOWER MJX X400W FPV Drone, which comes equipped with an HD Wifi camera and amazing in-flight maneuverability.

The three bonus prizes from International Processing Solution will be awarded to YNOT Grand Prix participants based on criteria to be announced on the day of the race.

For more information about the YNOT Grand Prix, visit YNOTGP.com. To reserve a spot as a driver or inquire about sponsorship opportunities, email Kopita at jay@ynot.com or contact him on Skype at LAJConsulting.