Zoey Laine is Uncaged and Let Loose Exclusively On BlacksOnBlondes.com

Zoey Laine is Uncaged and Let Loose Exclusively On BlacksOnBlondes.com 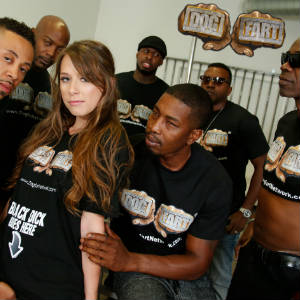 Laine plays a girl who might have the worst step-dad in history… and that’s saying a lot! You probably remember the last time you watched her service multiple Black Bulls, over at BlacksOnBlondes’ sister site, WatchingMyDaughterGoBlack: her step-dad almost lost daughter’s dance studio due to his degenerate gambling! Well… he’s done it again! And not only has he finally lost her dance studio, Laine herself has wound up in a cage! It’s official – Zoey is now property of the Dogfart Crew! Look at her give up her mouth and cunt and cums until she squirts! Laine’s a true submissive, and she loves it all! Whether she’s paying off step-daddy’s debt or being called derogatory names, daughter-girl wants more.

Laine’s BlacksOnBlondes NSFW trailer can be viewed in the site’s tour.

Webmasters can promote all twenty-two interracial niches in the Dogfart Network, plus a unique peek behind the screens site DogfartBehindTheScenes.com, by signing up with the Dogfart Affiliate Program.

All media requests for Dogfart Network should be directed to Matt at pornstarink@gmail.com