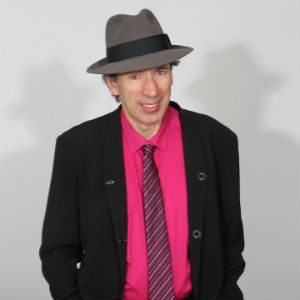 “I shot my first scene December 22, 1991,” says Moore. “A couple responded to an ad I put in LA Xpress, and I shot them at a motel outside of Disneyland, of all places. I looked at the scene six months later and felt sorry for the poor schmuck who had to edit it. Fortunately, I got better at it.”

Moore has a rich history in the industry and made several genres very well known. While not the very first person to shoot POV style, he made it extremely popular, not limiting his POV shoots to just BJs, but penetration as well. Many current POV shooters have credited Moore for inspiring them.

In 2012, he received a lifetime achievement award at the Transgender Erotica Awards (TEAs). Moore also maintains a stellar reputation in the industry and is known for being ultra-respectful to models from all walks of life and genres – he’s worked with everyone from  newcomers to veterans, and even helped establish the careers of many well-known performers throughout his own.

“After twenty-five years, I thought about retiring from performing, as I’m more than twice as old as most male performers in the biz,” says Moore. “But a good friend said to me, ‘If people still want to pay money to watch you fuck, why do you care how old you are!’ So, I’m not slowing down. In fact, Rodney has taken advantage of the disparity between his age and the girls he does scenes with by doing the successful series, Got it Bad for Step Dad.”

Moore’s also a talented musician and posts his popular music videos on his YouTube channel, where he sings and plays all the instruments.

Moore’s Mega Site, RodneyMoore.com, currently provides fans who share his sexual proclivities with 12 incredible sites for one low monthly price, and an enormous amount of content for webmasters to promote via his RodneyBucks affiliate program.

Rodnievision DVDs, VOD and more are available through your favorite adult e-tailers, including Adult Empire: https://store.rodneymoore.com/streaming-video-on-demand, which can be promoted via AdultEmpireCash.

In 1992, award-winning director and performer Rodney Moore entered the adult biz shooting couples and amateurs, and over 800 titles later; he continues to be a force to be reckoned with. Known affectionately as The King of Cream, he’s been nominated and won several AVN and XBZ Awards, in addition to making the AVN Hall of Fame in 2006 and being inducted into XRCO Hall of Fame in 2013.

Before adult, he was a musician and still continues to make music, including his recent EDM track entitled “Only with the Lights Out” and his highly original renditions of other people’s songs that he posts to his YouTube page http://www.youtube.com/dpmusic100.

Back in the early 80s, he produced two disco hits by an artist named Salazar. He’s produced an album of Meredith Brooks (famous for her song “I’m a Bitch”), in addition to working with jazz great Kenny G and rapper Sir Mix-A-Lot. In 1985, he wrote, arranged and produced a charity record in the same vein as “We are the World” called “Give Just a Little,” featuring local celebrities performing that raised money for the local food banks.

All media requests for Rodney Moore & Rodnievision should be directed to Erika Icon at erika@therubpr.com.

No spam, notifications only about new products, updates.
PrevPreviousDIMOCO Unveils Top Five Trends in Carrier Billing for 2017
NextThings To Ask Of Your Traffic VendorsNext
On Key