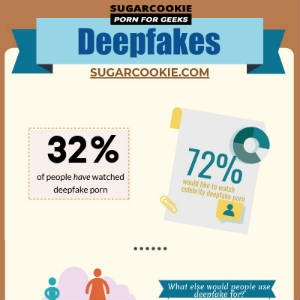 “Despite a number of high-profile bans, deepfake technology isn’t going anywhere, so we decided to investigate and find out what people really think of it.”

Sugarcookie has also released an accompanying infographic, which reveals how strong the demand is for celebrity sex tapes – even if the ‘celebrities’ in question are fakes.

Female fans were also interested in inserting themselves into deepfake videos (34%), while only 16% of men would like to watch themselves; guys, it seems, were far more interested in using the simulated images “for pranks and making memes,” added Sugarcookie.

“And really, it’s hard to look at deepfake memes and not want to get involved… nearly 1 in 5 people want to use deepfakes so they can see themselves in a movie. We’re not sure if that shows that some people have some seriously big egos, or hints at a future, super-immersive movie viewing experience Hollywood needs to get excited about right now!”