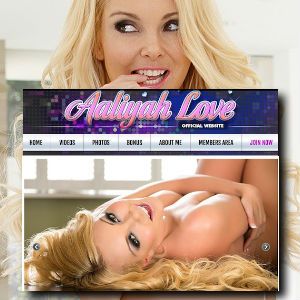 (Hollywood, CA) Aaliyah Love’s site is back…bigger and bolder than ever. She’s joined the ever-growing CherryPimps network and has relaunched her official site, aaliyahlove.com. Her new sites boasts gorgeous graphics, tons of hi res photos, exclusive new scenes shot in HD, and live shows. And, this is now the only place you can interact with Aaliyah–if you want to talk to her and get to know her up close and personal, you have to join her site.

“CherryPimps and I have even working hard to build a website that we both think has all of the features that the fans would want,” says Aaliyah Love. “I am super proud of what we came up with! I’ve also been shooting so many scenes for the relaunch. I have so many new scenes that no one has seen yet, but they are definitely some of the hottest ones I’ve ever done! And, you can see them exclusively on AaliyahLove.com! I haven’t done much webcamming in the last two years, but with this relaunch I’m going to start regular live shows through my members area. My website is based around interaction, which will include an email system to contact me directly and a rating system for scenes.”

Aaliyah joins Missy Martinez, Adriana Chechik, Ashlee Graham, Heather Vahn, Hope Howell, and Trinity St. Clair, who are also part of the CherryPimps Network. Members of her site will not only get access to all of these sites, but also get to watch Aaliyah’s live shows for free. Additionally, in joining CherryPimps, Aaliyah’s now exclusively available through Streamate’s premier live cam platform. Her first show will be November 1st at 4pm PST/7pm EST.

To interview Aaliyah Love for your site or publication, contact Erika Icon of The Rub PR at erika@therubpr.com.

Aaliyah has appeared on the pages of Barely Legal, Cheri, Ravers DVD and Club DVD in addition to holding the title of Twistys Treat of the Month. She’s been nominated multiple times by XBIZ for her website,aaliyahlove.com, and in 2013 she received her first AVN Awards nomination for her site. And, Melon Cakes has just released her line of signature tees.

Keep up with all her adventures by being one of her 200,000+ followers on Twitter @AaliyahLove69 and like her on Facebook facebook.com/therealaaliyahlove. You can also find her on Instagram instagram.com/AaliyahLove69/# and Tumblr aaliyahlove.tumblr.com, and read her official blog blog.aaliyahlove.com. Make sure to join her recently relaunched site aaliyahlove.com through the CherryPimps Network. And, take her home with you, by buying her official merchandise at her store aaliyahlovesmut.myshopify.com.