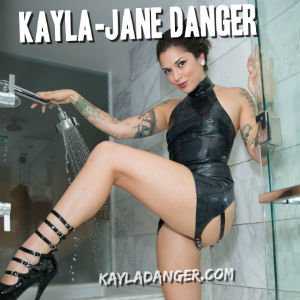 The premise of the film is a couple (Rae and Bond) is caught in a love triangle that not only brings them closer but also brings their sex lives to new levels. Long plays a stripper and Archer plays a server who happens to stumble into the couple’s life on the right night.

“With the success of Carrie’s Secret that I wrote and directed for Filly Films, I decided that it was time for me to start my own lesbian line that was provoking, and Provocateur Films was born,” says Danger. “I was very pleased with the filming and the sex was very hot – the girls were so into each other, and this was definitely real lesbian love. Award-winning Editor Sonny Malone is currently editing the film and can’t wait to release it early next year.”

The film is the first from Danger’s new studio, Provocateur Pictures, which will not only produce all-girl feature films, but also vignettes and non-feature titles. Distribution companies interested in taking on a new avant-garde lesbian line can contact Danger via email at kjdmedia@gmail.com.

Some people might think it’s dangerous to go from a go-go dancer, burlesque performer and fashion design and illustration student to being the Queen of Lesbian Foot Worship and soft core sensual scenes, but Kayla-Jane Danger has done it… and without fear, making fantasy into her real world. In her previous incarnation, Danger garnered the title Music Video Honey and appeared in over 50 videos for world famous bands. Along with appearing on her own sites MyDollParts.com and KaylaJanePOV.com that she runs, operates and makes exclusive content for, the girl next door with the ALT look has worked with Burning Angel and Sex Art, and has been photographed by legendary photographers Holly Randall and Ken Marcus for the multiple times she has graced the pages of Hustler’s Taboo.

Her site, MyDollParts.com, nominated in 2013 by The Sex Awards, XBIZ and AVN, features Danger’s perfect legs, ass, and feet working with some of the hottest girls dreams are made of – her myriad of high quality fetish and erotic sites that make up her KJD Media network are some of the most popular and original sites in the fetish world. In 2014, Danger’s dynamic sites helped her win AEVC’s award for Best Webstar of the Year, and she made her directorial debut with Filly Films and her movie, Carrie’s Secret. She also hosted the 2014 Inked Angels’ Inked Awards and was a nominee for the Best Ass category. 2014 also brought new XBIZ nominations for Web Star of the Year and All-Girl Release of the Year, for her feature film Carrie’s Secret.

Danger stars in Zalman King’s film, Pleasure or Pain, that debuted on Cinemax and was then released on DVD. She also penned the novel based on the screenplay, now available on Amazon and Smashbooks.

To keep up with her ever-growing empire and exciting new projects including her VIP parties and her role as spokes model and host in the gold Rush Rally, follow her on Twitter @kjdangerdoll and Instagram http://instagram.com/kjdangerdoll# and make sure to like her fan page on Facebook at https://www.facebook.com/KaylaJaneDangerOfficial.

To interview Kayla-Jane Danger for your site or publication, contact Erika Icon of The Rub PR at erika@therubpr.com.