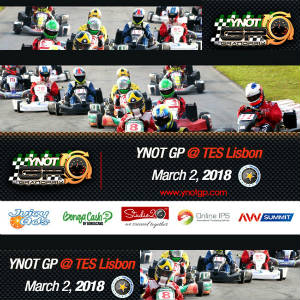 (Lisbon, Portugal) February 22, 2013 – The YNOT Grand Prix is revving up for its ninth exciting season, which kicks off at The European Summit in Lisbon on March 2.

For the first time, the YNOT GP will run at Lisboa Kart, the only indoor Go-Kart track in the Lisbon area. The race begins at 3:30pm local and will continue until 6:30, with buses scheduled to begin transporting drivers and spectators from the TES venue hotel to the track at 2:45 and 3:00, then returning to the hotel at 5:45 and 6:30.

As always, entry to the race track, the equipment, food, drinks and transportation to and from the race are complimentary, thanks to the generous sponsorship of JuicyAds, BongaCash, Studio20, International Processing Solution and AWSummit.

“I’m really proud of the fact we’re entering our ninth season of the YNOT Grand Prix, which I expect to be just as competitive and fun as ever,” said YNOT co-owner Jay Kopita. “Nine years is a great run for any adult industry event, and based on the great participation and feedback we’ve received over the first eight editions of the Grand Prix, I look forward to many more years of it to come.”

As with the last two seasons of the YNOT GP, drivers will compete for a $1,000 grand prize, which will be awarded based on the season-long performance at four races: the race in Lisbon, a second race at the Phoenix Forum in March, a third which will take place during the AWSummit in Constanta, Romania in June, and the fourth and final leg at TES Prague in September.

“Starting things off at Lisboa Kart, which is a very twisty, hairpin curve-filled track, is a really challenging way to begin the season,” Kopita said, “but I’m confident the competitors will be up to the task and turn in impressive performances.”

Under the YNOT GP point system, a first-place finish yields 10 points, second receives 8 points, third receives 6 points, fourth through sixth place finishers get 4 points each and seventh place through the remaining “death match” field which completes the final race get three points each. The participant with the highest point total will be awarded the grand prize following the final race of the season at TES Prague.

Given the popularity of the event, Kopita is encouraging participants to register early, rather than waiting until the day of the race to enter.

“I want things to run as smoothly as possible at the event, so it’s important that people register in advance of the race, so we can set up the heats and have everything organized, rather than wait until the last minute once we’re at the track,” Kopita said. “This year we’re capping it at 70 drivers due to time constraints and equipment availability — so if you want to be a part of the race, it’s important to register ASAP.”

For more information about the YNOT Grand Prix, visit YNOTGP.com. To reserve a spot as a driver or inquire about sponsorship opportunities, email Kopita at jay@ynot.com or contact him on Skype at LAJConsulting.