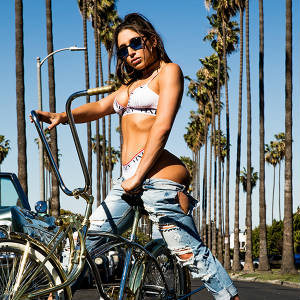 Danger accepted the industry’s most prestigious title live on Vixen’s Instagram this past week. The live event was a success once again and garnered thousands of viewers on Instagram Live in a matter of minutes. Danger toasted to her accomplishment on the infamous gold couch alongside Vixen Angel of the Year Tori Black, Vixen Angel Ana Foxxx and Vixen mastermind himself Greg Lansky.

Danger followed up the gracious acceptance of her new title with an exclusive photoshoot and Vixen Angel collaboration for industry visionary Lansky. The photos will be posted today on Vixen’s Instagram and Twitter.

“I am so incredibly honored Greg Lansky chose me to be join the Vixen Angel family,” said Danger. “Greg has always been a special person in my career. He was one of the first if not the first person to tell my agent Mark Spiegler ‘This one’s got potential!’ I’m so grateful for all the amazing memories he’s given me on and off set. Especially our most recent shoot for Vixen, it was so amazing to bring his concept to life. I genuinely gave my best because he always does the same. Team work made the dream work.

“Abella is an amazing artist,” said Lansky. “She always puts the work in and is never afraid to try new things and continuously broadens her horizons. Abella hasn’t taken her foot off the gas since she began her journey in the industry! I’m excited to have her join the Vixen Angel family along with some of the most inspiring women in the industry.”

Webmasters can profit from the Vixen.com library of luscious Angels by joining the MadCheddar Affiliate Program.