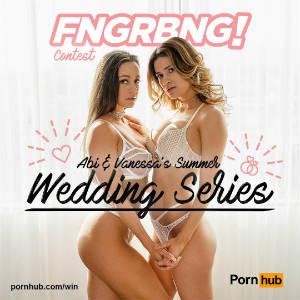 In the sizzling summer series co-produced by both ladies and shot by Shameless, Mac and Veracruz tie the knot. The series starts with their engagement and ends in wedded bliss. The ladies are giving away two amazing prize packs. First prize is a virtual date with the newlywed couple via Skype and their panties worn in the engagement scene. Second prize is an autographed pool float from the scene and signed Polaroids of both hotties.

Entering the contest is easy. Members get one entry for watching the video and favoriting it. Fans can get a second entry to increase their chances of winning by subscribing to the FNGRBNG Channel at https://www.pornhub.com/channels/fngrbng. Subscribing is one easy click and it’s free.

“Abigail and I are very excited about this series and that our fans can not only witness our wedding from the engagement through the consummation, but also celebrate our love with the contest,” says Veracruz. “In a typical wedding, we would be getting the gifts. We’re thrilled to be able to gift our fans and thank them for their support.”

All media requests about FNGRBNG should be directed to Erika Icon of The Rub PR at erika@therubpr.com.

No spam, notifications only about new products, updates.
PrevPreviousStella Cox Gets Her Feet Jizzed On For Dogfart’s BlackMeatWhiteFeet.com
NextKimber Haven Re-Scores Major Nominations for 2017 Fetish Con AwardsNext
On Key