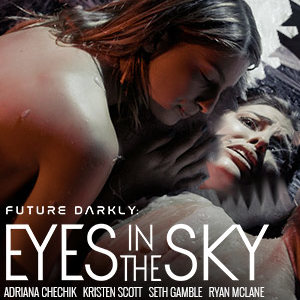 Future Darkly‘s sixth and final chapter, which Mills wrote, directed and co-produced (with Craven Moorehead), offers the theory of demonic-looking aliens abducting humans from Earth for their own sexual pleasures, with Adriana Chechik, Kristen Scott, Seth Gamble and Ryan McLane along for the ride.

“With Future Darkly being such a breakout success for us this year, I knew we had to end the first season with a very strong episode featuring an all-star cast,” said Mills of the finale. “The alien abduction theme is a classic sci-fi trope that is ripe with taboo undertones, so it offered me the chance to pay homage to some of the old-school horror films I love.

“Adriana and Seth play the perfect 1950s-era horror movie couple transplanted into our near future universe… and Kristen and Ryan are haunting in their portrayals of the bitter couple trapped on the ship. I can’t wait to see the response from fans!”

“I am beyond excited to be a part of Future Darkly‘s season finale. As a big sci-fi buff, I felt right at home getting down and gooey for my role in ‘Eyes in the Sky’,” said Chechik.  “And I am always excited when I get to act, as it is one of my lesser-known talents.

“The best part of shooting with Bree and her crew is that they allow and help me really get in character, which is something I don’t often experience on set for adult,” said Chechik. “It gives me a chance to really be a part of an alternative world while on set. I can say ‘Eyes in the Sky’ will make you question a romantic weekend in the woods and looking up to view the stars!”

“I absolutely love working for Bree, Craven and the entire crew,” said Gamble. “To be a part of the finale of Future Darkly was an honor and a privilege.

“It was such a fun shoot, and crazy being wrapped in Saran Wrap! Every time I get to be on set with Bree and this crew, I can’t help but be excited and grateful…  and I’m really looking forward to everyone getting to see the whole series. It is one of the best series I’ve ever had the fortune to be a part of.”

Find the full scene and trailer at PureTaboo.com/Eyes-In-The-Sky and visit the Performer Pages of ‘Eyes in the Sky’ stars Chechik, Gamble, Kristen Scott, and Ryan McLane.

To get caught up on the entire Future Darkly series, including ‘Artifamily’, ‘The White Room’, ‘Don’t Panic!’, ‘Smart House of Horrors’, and ‘The Love Hotel’, visit PureTaboo.com/en/future-darkly-season-1.

Webmasters can profit serially from the multi-episode structure of this and other Pure Taboo movies by signing up with the FameDollars affiliate program.

No spam, notifications only about new products, updates.
PrevPreviousKinktra in the Raw Cast Their Vote for Siouxsie Q
NextSophie Dee Covers and Spreads FHM Sweden’s January 2019 IssueNext
On Key