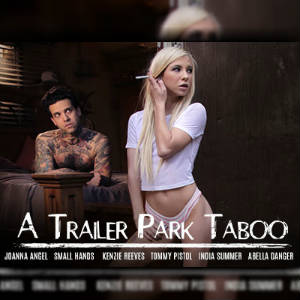 (Montreal, QC) April 6, 2018 – Pure Taboo, Bree Mills and Joanna Angel have announced the release of a new three-episode feature release, A Trailer Park Taboo, about the hazards of trying to escape an old bad life for a new good one.

‘Part 1: Existence is Imperfection’, available since April 3 exclusively at PureTaboo.com, stars  Angel as a student who befriends Jack (Small Hands) who’s desperately in search of a life with more promise and meaning. With the help of Joanna and the philosophy of Jean-Paul Sartre he sets out to reflect on his choices versus his destiny. One thing keeps dragging him down, though… his past, and his stepsister, played by Kenzie Reeves.

“I see myself making decisions I know I shouldn’t make, and I can’t stop making them. In those moments it’s like I’m possessed by my own mind and I can’t separate… do our actions define us, and do they have to?”

Produced by Mills and written and directed by Angel, A Trailer Park Taboo was an emotional departure for the adult superstar, who often produces lighter fare for her studio, BurningAngel Entertainment.

“I stepped outside of my comfort zone and did something very different than what I normally do here – and I have to say that I loved it,” said Angel. “Working with Pure Taboo was an incredible experience. I was honored that Bree welcomed me into her home and let me take over for a few days. And we all know her home is a pretty intense place. I wanted to do it justice! ”

A Trailer Park Taboo ‘Part 2: We are our Choices’ stars Angel, Tommy Pistol and India Summer and is set for release April 26, and ‘Part 3: Hell is Other People’, starring Angel, Reeves, Abella Danger, and Small Hands, will come out May 10.

“Kenzie Reeves completely blew me away in her role,” said Angel. “She is certainly on her way to being a very big star in this industry and I hope she remembers me when she gets there, HA!

“She had never done a feature before – let alone a feature where she had to break down and cry in multiple scenes – and she did amazing.

“I was in tears behind the camera as she delivered her lines but then incredibly turned on as soon as a dick went into her mouth. And this guy named Small Hands was the leading male… and, well… yeah… he never ceases to amaze me. But don’t tell him I said that!”

Find the full scene of A Trailer Park Taboo ‘Part 1: Existence is Imperfection’ at PureTaboo.com.

Launched in September 2017, PureTaboo is the latest studio operated by the Gamma Films Group, the production arm of adult company Gamma Entertainment. Helmed by XBIZ and AVN award-winning director Bree Mills and promoting the tagline ‘Some taboos are meant to be broken’, PureTaboo features the most popular and up-and-coming faces in adult today, challenging themselves to bring acting and sexual performances in a way viewers have never seen before.

“We hope to leave you equally shocked and aroused,” says Mills. “After all, aren’t some taboos meant to be broken?”