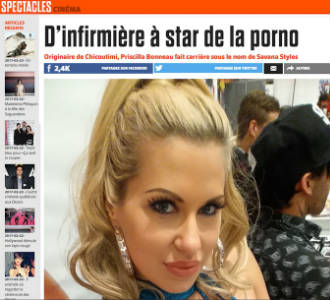 The article also features photos of Savana as a nurse, a couples-shot of her and Steele, pics from the trade show, and other assorted photos. Read the article in its entirety in French at http://www.journaldemontreal.com/2017/02/15/dinfirmiere-a-star-du-porno.

Non-French speakers have to use Google Translate to read the article.

“I’m so excited that Le Journal de Montréal interviewed me – it’s a big deal and makes me happy that everyone back home will know about my successful career and how hard I’ve worked to make it happen,” says Styles, who occasionally slips some French ito her scees. “I’m honored to be interviewed by such an esteemed news source.”