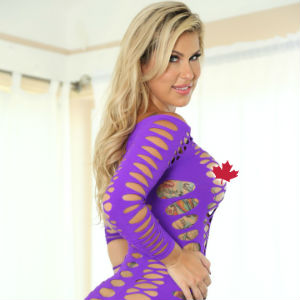 (Hollywood, CA) Blonde Canadian bombshell Savana Styles is one of the stars of Lethal Hardcore’s Cheeks for Weeks 2. Styles’ infamous backside is worshipped by Stoney Curtis and she shows it off to him with some twerking and then bounces her amazing boobs. She blows him by the pool before the two head into the bedroom for the real action.

“I was in the first DVD of this series and was honored that Stoney asked me back to be in Cheeks for Weeks 2,” says Styles. “It’s always great fun to work with him, and we work really well together. I hope everyone enjoys my new scene.”

About Savana Styles [14/01/2018 – this Payout Profile is out of date; for the latest, please clicktap here]

Styles has graced the pages of many magazines during her time as a mainstream model and scored the cover of Canadian Hustler in 2012, before entering adult. In 2016, she was nominated by AVN’s Fan Awards for Most Epic Ass.

Before adult she was a registered nurse, international model, and competed in fitness competitions, as was chronicled in her 2017 interview with mainstream news outlet Le Journal de Montréal.

When she’s not in front of the camera, you’ll find her chilling at home with her husband Lexington Steele and her dogs Tarzan and Jane, hunting and fishing, playing guitar, or finding her next stylish outfit.

Also, make sure to check out her new online fetish studio http://clips4sale.com/studio/109816/Mercenary-Enterprises#startingpoint.

Interview Styles for your site or publication via Erika Icon of The Rub PR at erika@therubpr.com.