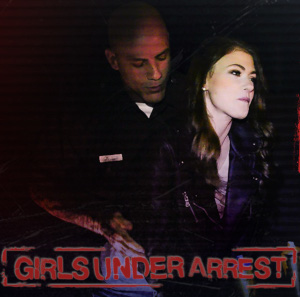 Directed by Craven Moorehead, the bi-weekly event, described as ‘a reality-inspired series following crooked cops getting their way’, captures bad girls at their very worst as they tangle with the long arm of the law in five electrifying episodes of unlawful mischief.

Katya Rodriguez kicks off the new season in the first episode, ‘Shut That Brat Up’, as a spoiled rich girl who gets busted at the local mall by officers Derek Davis and Zac Wild for shoplifting.

“My experience playing this rich high class, snotty girl was pretty fun… my character thinks she can get away with anything and can take whatever she wants,” said Rodriguez. “This has been one of my fantasies – to get arrested by a handsome cop and fuck him on his car while he’s on duty… I was excited the whole time and can’t wait to shoot more scenes like these.”

For Whitney Wright, who plays a destructive troublemaker in Episode 2, ‘Delinquent Sisters’, “It was a really fun and unique experience getting to shoot for Girls Under Arrest. I’ve never been arrested, so I had no experience in this role haha. I got to work with Gia Derza for the first time, and the scene came out really well. I’m excited for the fans to see it.”

Bobbi Dylan loved shooting Episode 3’s ‘Lesbian Domestic Dispute’ with Jane Wilde: “I loved creating a bad-ass character with Craven and crew to fight the cops and try to free my girlfriend, until we both get in over our heads and have to make an agreement to get out of it with no criminal record!”

“Definitely one of the hottest arrests so far,” said Wilde. “And you can trust me – I’m a cop!”

Vanna Bardot got a kick out of being a part of the ‘Happy Endings Parlor Raid’ in Episode 4. “I really enjoyed playing a character that was more distressed and had to make a dark decision to get through her predicament.”

She added that Moorehead’s shooting style “was definitely a lot different than the usual shoots I do. We did most of it in one take, which I think worked very well for the scene because we didn’t need to cut often and break character… it was overall a really great experience!”

The Episode Guide of Season Two of Girls Under Arrest: Second Surge is as follows:

Girls Under Arrest is now accessible to all members of Gamma Films studios’ sites, as well as the new Adult Time platform, officially launching Spring 2019; those interested in sneaking a peek or purchasing the series can visit to sign up and subscribe to Adult Time’s entire catalog of award-winning content, giving its members access to over 50,000 scenes within the Gamma Films studio network.

Learn more about Girls Under Arrest at the site as well as Twitter.com/Girls_Arrest.

Webmasters and affiliates can promote and profit from the world of Gamma sites by signing up with FameDollars.com