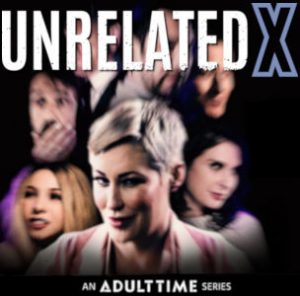 “When I was first asked to come on board and direct a new series where unrelated people had sex with each other, I’ll admit I was shocked and confused,” said Angel. “I begged to please give me the same fauxcest scenarios I was used to, but the multiple award-winning Bree Mills (‘multiple’ as in ‘multiply the number of awards I’ve won by 100’) helped me step outside of my usual routine, and now… I couldn’t be more proud!”

UnrelatedX is jam-packed with A-list performers portraying characters who get to live out their most twisted sexual fantasies. In the pilot episode, Kenzie Reeves has sex with Steve Holmes, who plays a random older man that she isn’t related to at all.

In another episode, Joanna Angel performs a scorching hot sex scene with Tommy Pistol, who plays the role of a family doctor who is… just a family physician.

“This is the most twisted series we have produced to date,” said Adult Time’s Chief Creative Officer Mills, who created Pure Taboo in 2017. “If any other performers have stories about their own personal experiences having sex with people they aren’t related to, please contact me! Do not be ashamed, do not conform. Do not settle for anything less than challenging the status quo! Unrelated X is here to help bring your stories to life!”

“As everyone knows, step-porn is my true passion… there’s just something special to me when a 26 year old girl blurts out the line, ‘I’m 18 and it’s not like you’re my real dad!’ added Quasar. “When Joanna asked me to shoot normal sex between unrelated people who were roughly the same age, I was appalled but, out of my loyalty to her, I agreed. I hate to admit it, but I actually enjoyed the experience. It was challenging and intriguing, and I really liked the ‘taboo’ nature of it. I guess I’m a freak!”

To learn more about Adult Time, visit www.AdultTime.com and access the full library – over 60,000 premium scenes, 200 channels and 5+ new releases per day – of the network’s award-winning brands.

About Pure Taboo:
Launched in September 2017, Pure Taboo is the leading taboo erotica studio in adult, including over 200 featurette episodes available on the Adult Time platform. Created by award-winning filmmaker Bree Mills and promoting the tagline ‘some taboos are meant to be broken’, Pure Taboo features the most popular and up-and-coming performers in adult today, challenging themselves to bring acting and sexual performances in a way viewers have never seen before.