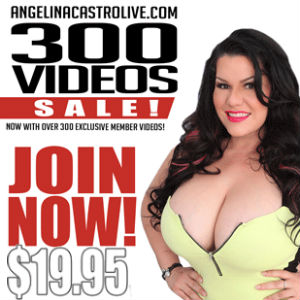 Castro celebrates with a special sale – members can join for just $19.95 by clicking this link. Her website is part of Vicky Vette’s VNA Girls Network which features stars such as Julia Ann, Penny Pax, Nikki Benz, Puma Swede, Sunny Lane, Jelena Jensen and Sara Jay. The network plus daily live shows are free with membership.

Castro is also a frequent guest on mainstream Spanish media outlets (such as Esta Noche Si and I Heart Radio with Enrique Santos). Castro was the first adult star ever to make a morning appearance on Telemundo and she co-hosted a popular talk show SOS (Sex or Sexy) on Miratv.tv.  In 2012 she made worldwide headlines as part of the #TeamBJ twitter sensation with Sara Jay (pledging to give followers oral sex if the Miami Heat won the NBA title).

“My Official Site, AngelinaCastroLive.com, is truly my labor of love,” says Castro. “I am very proud of 300 videos. I shoot for my site regularly and thankfully it’s never been more popular with fans. Thank you to all the fans buying memberships!”

Castro’s webmaster and a star in her own right, Vicky Vette, expresses pride in her cohort.

“Angelina is a great example of what a girl can do with an Official Site,” says Vette. “She really started with nothing and has steadily worked very hard on quality content that fans want to buy.  I wrote a recent blog about her.”

Webmasters of course can promote Castro as well as any or all of the individual VNA Girl sites by joining Vette’s own Sticky Dollars affiliate program.

No spam, notifications only about new products, updates.
PrevPreviousSavana Styles Is All in Alyssa in New Reality Kings Scene
NextArchAngel Announces 2017 Booty QueenNext
On Key