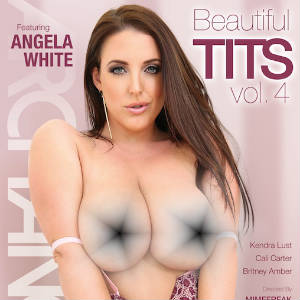 (Chatsworth, CA) May 9, 2017 – ArchAngel is putting their best breasts forward with the latest release of their highly successful series Beautiful Tits.

Released last week, Beautiful Tits 4 is directed by MimeFreak and features some of the most amazing knockers in adult. With stunning Angela White helming the cover, baring her natural 32Gs, the production features ArchAngel Exclusive Contract Star and Booty Queen Kendra Lust showing off her fantastic 34Es and all her amazing assets in an unforgettable scene, buxom blonde Britney Amber captivating with her perfect 36-24-34 measurements, and finally Contract Star Cali Carter’s 34D breasticles mesmerizing viewers (as will her on-camera vocals) as she gets the pounding of a lifetime.

“The fourth edition of Beautiful Tits showcases some of the most magnificent mammaries all on one DVD,” says General Manager and Director MimeFreak. “It was an honor to finally work with Angela White, and she went above and beyond my expectations and definitely earned her place on the cover. The fans have been asking for Angela, and Kendra, Cali and Britney are already fan favorites.”

Watch the Beautiful Tits 4 trailer and see the NSFW cover at http://archangelblog.com/some-of-the-most-beautiful-tits-in-the-world-are-featured-in-beautiful-tits-4/

Promote Archangel’s official site ArchangelVideo.com, featuring some of the most beautiful women in adult, by signing up for their affiliate program, ArchangelDollars.com.

No spam, notifications only about new products, updates.
PrevPreviousSarah Vandella Is in the Most Asstastic DVD Releases
NextSuper Freak Chanel Preston Gets DP’d For BlacksOnBlondes.comNext
On Key