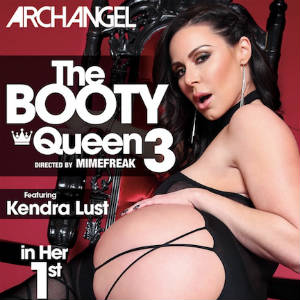 (Chatsworth, CA) April 9, 2017 – A few weeks ago, ArchAngel gave members of ArchangelVideo.com just a taste of exclusive Contract Star and current Booty Queen Kendra Lust’s showcase The Booty Queen 3 by exclusively premiering Lust’s first DP. The DVD is set to street this weekend and could be the top-selling DVD in ArchAngel history.

“When MimeFreak approached me about being the next Booty Queen, I was honored and excited!” says Lust. “My fans have always loved my big booty and I’m thrilled to give them so much of it in this showcase. I had the pleasure of working with new talent like Jake Adams, and seasoned talent like Markus, Mick, Riley, Ramon and two of my favorite gals, AJ Applegate and Jada Stevens. It was an amazing experience and I can’t wait for you all to see what’s in store from the next Booty Queen.”

“I’ve directed all the Booty Queen showcases and they just keep getting better and better,” says General Manager and Director MimeFreak. “We won Showcase of the Year at XBIZ this year for Booty Queen 2. With the caliber of talent and performances in The Booty Queen 3, we could definitely repeat our win.”

“Everything about Kendra is gold and her showcase will definitely be a top-seller,” says Gabriel Guzman. “Her DP scene was one of the most watched scenes on our site and we had tons of membership joins. Whether you’re an ArchAngel fan or a die-hard Kendra Lust fan, this DVD is a must-have for your collection.”

And, the party doesn’t stop with the DVD. Fans who entered the Booty Movie 3 Contest for some incredible prizes will be notified by email by Monday, April 10, and their names will also be posted to the ArchAngel blog. Winners will be personally chosen by Lust.

Webmasters can profit from The Booty Queen 3 and much more Lust content at Archangel Video by joining their affiliate program ArchangelDollars.com.